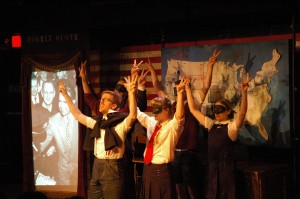 An unexpectedly satisfying pleasure of The Neo-Futurists’ “44 Plays for 44 Presidents,” which opened on Saturday night at the Neo-Futurarium, is the piece’s nerdy laundry list of presidential factoids. Frequently presented in the form of absurd actual quotes (indicated by helpful and sarcastic “Direct Quote” light-up signage), nearly all of the nifty information is shrouded in justified negativity. In middle school, we had to memorize the formidable roster of Commanders-in-Chief by name, but unfortunately not by deed. And watching so many of those disconcerting deeds play out—as presidential reasoning transitions from Manifest Destiny to electorate-decided mandate—can prove rather gruesome. But that’s the oft-ignored reality of America’s tumultuous adolescence. This great experiment ain’t always been so squeaky clean.

In this second edition of the Neo-Futurists’ oddball living textbook, the history cram-session is jarring and unfamiliar to an audience exhausted from Barack and Mitt’s stump speeches proclaiming the sacred premise of retreating to a brighter past—be it Clintonian or Reaganian. Well, “44 Plays” says perhaps the past wasn’t so spotless, after all. Through the years, the United States has seen government-sanctioned genocides, periods of eighteen-percent unemployment, weapons sales to would-be enemies, a Civil War killing two-percent of the population, and a seemingly endless parade of other unthinkable atrocities. The hall of presidents is, more or less, a historical house of horrors. Yet somehow those bonkers Neo-Futurists pack their evening full of uproarious satire and, even more remarkably, resonating poignancy.

The workhorse ensemble—Bilal Dardai, Joe Dempsey, Rawson Vint, Dina Marie Walters, Ryan Walters and Rani Waterman—incisively tackles a major theme of each of the forty-four presidencies by using a lazy Susan of clashing styles and shifting perspectives. These men and women establish focus and leadership by adorning a presidential coat that gets frayed and torn as the office accumulates an objectionable legacy. The styles, as theatrical as one would expect of the Neo-Futurists, are forceful and perfectly paired to each story. A sucker punch of a sequence sees Franklin Roosevelt (Dempsey) supported in a fluid, deliberate dance of fate as he attempts to repair a marble track—or America’s floundering economy. Another has Jane Pierce (Walters), wife of President Franklin Pierce, read aloud a picture book that tells the tale of her husband’s selfishness and deception in the eyes of God. The first iteration, “43 Plays for 43 Presidents” originated here in 2001, in the eye of the first term of President George W. Bush, and featured the play’s original writers. The new cast, part of a national festival of productions of this play, betray the detention-room subversion of an improv troupe, but discover oodles of bone-chilling moments of profundity inside of their clownish antics. 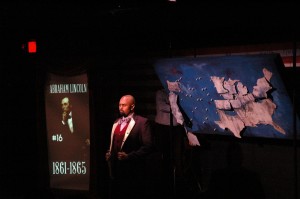 Halena Kays’ direction has a sardonic wit and sprightly imagination that strings together the multitude of storytelling methodologies into a single entity—with the aesthetic aid of Lizzie Bracken’s creepy-school-boy production design and Maggie Fullilove-Nugent’s macabre lighting. The original cast and writers—Andy Bayiates, Sean Benjamin, Genevra Gallo-Bayiates, Chloe Johnston and Karen Weinberg—also directed the work the first time around, but the piece surely benefits here from a single guiding force. Much of the nation’s earliest history is performed with vaudevillian or farcical physicality and situational hyperextension, accompanied by Mike Przygoda and Curtis Williams’ sexy and period-evocative music. Vint is terribly spunky as he leads an upbeat Richard Nixon song, and Waterman breathlessly jumps, flips and rattles off policy while she illustrates Woodrow Wilson’s Fourteen Points. And though the initially rampant silliness reappears in spurts during the later portion, the play takes on a wisely sustained sensitivity beginning with President Truman. And the entranced audience is grateful for it.

For there is a major difference in lampooning President Garfield and President Kennedy. Both were assassinated while in office, and each death, of course, had its damaging reverberations. But, unlike Garfield, the Dallas murder of John F. Kennedy still relevantly echoes in the minds of many Americans. During President Kennedy’s play, a television is rolled out and a glamour video of JFK is screened—interspersed with live audience statements from the lobby about their personal connections to the fallen president. Those confessionals, derived from a combination of older and younger audience members, were absolutely fascinating and proved those connections are still shockingly vital and deeply felt today. As I consider the play, I recall nearly keeling over from laughter over and over again. However these solemn moments caught inside the panoply of fun elevate “44 Plays for 44 Presidents” above the usual satirical sketch comedy. There is certain to be a downpour of political theater, comic and tragic, in coming weeks. But you’ll be hard pressed to encounter any plays with the intellect and careful consideration of what you’ll find onstage right now at the Neo-Futurarium. (Johnny Oleksinski)