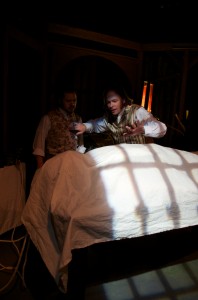 Opening and closing in the tight quarters of a ship on the Arctic Sea, most of playwright Bo List’s adaptation of Mary Shelley’s novel unfolds as a recounting of events from a traumatized Victor Frankenstein (a rather flat Ed Krystosek). You know the story: guy makes monster, guy loses monster, monster gets guy back (revenge-wise). List sticks close to the source, retaining much of Shelley’s rich language and only conflating a few events for brevity’s sake (though the show still clocks in at 135 minutes, including a ten-minute intermission). The first act takes a while to get going, but prop designer Ian Anthony’s reanimation machine chugs, bubbles and twirls admirably as Frankenstein harnesses electricity (and archaic science) to jolt life into dead flesh. The second act is shorter and more engaging, filled with violence and tragedy that steadily builds as the creature (a hulking Mark Pracht) comes into its own while seeking vengeance for being abandoned by its creator. This is a captivating script and City Lit’s production has a few moments of tautness, but director Terry McCabe needs to capitalize on the final showdown by slowly turning up the tension in the last quarter of the show.  (Zach Freeman)