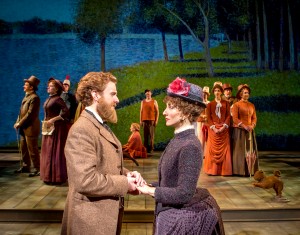 Following up on his spectacular production of “Follies” last spring, Gary Griffin returns to Sondheim to open Chicago Shakespeare Theater’s new season with a work he mounted at the venue a decade ago but which, this time around, has fittingly moved into the company’s larger downstairs theater.

Unlike works of the Sondheim canon with a clear narrative and straight-ahead musical numbers, “Sunday in the Park with George” is a more abstract and at times virtually operatic Sondheim opus about the genesis and contemporary significance of a major work of art that is a Chicago institution, namely, Georges Seurat’s “Un dimanche après-midi à l’Île de la Grande Jatte” (“A Sunday Afternoon on the Island of La Grande Jatte”).

Sondheim, like everyone else, was fascinated with “La Grande Jatte,” and used to make trips to Chicago just to spend time with the painting in the Art Institute. Reading catalogs and anything else he could get his hands on about the work—which signaled a new style of Impressionism, dubbed Pointillism, that used precise dots rather than brush strokes—only to find himself sorely disappointed about how little was actually known about it. We do know it took Seurat two years to paint the giant canvas and that he created various studies for it that have survived. Sondheim combined these details with the curious fact that Seurat himself, who did paint self-portraits, did not include himself in the work and the mystery of his death at age thirty-one of unknown causes, to construct a speculative cross-generational fiction.

The end result says as much about the influence and role of art in our lives as it does about Seurat, which has always been part of the work’s appeal. What often vexes audiences along the way is that the same actor who plays nineteenth-century George in Act I plays his twentieth-century great-grandson George in Act II (Jason Danieley in this production) and the actress who plays nineteenth-century love interest Dot also plays her twentieth-century daughter Marie (Carmen Cusack), now an old woman in Act II; that same scheme holds true for other cast members as well and, usually, little attempt is made to delineate these characterizations. By attempting to do so here, Griffin makes the narrative more transparent while wisely still allowing the identifications to be made with the same cast in different roles across the centuries. 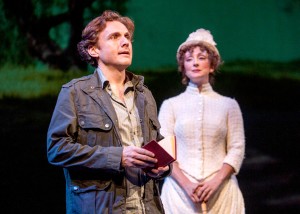 The piece is magnificently sung by an extraordinary cast, but despite having Broadway veterans as the leads, we unfortunately never really buy that they are in love, an important subtext for everything that is to follow. True, George is so busy attempting to catch Dot in sketches and on canvas that he cannot provide the kind of relationship she would wish. Yet the show is not written as if George is a monk solely devoted to his art as Danieley portrays him. He does impregnate her and adores her in his own way, but is clueless to show this aside from capturing her for posterity. When Dot feels forced to leave him for a baker who she does not love but gives her “what I need,” George paints over a painting of her she comes to pick up as she bids farewell. These need to be passionate scenes, but here, they fall flat and are as cold as ice. It makes giving a damn about what follows a challenge.

Still, with its breathtaking use of digital projections and its high level of stagecraft as well as the consistently high level with which Sondheim’s score is rendered nonetheless makes this a well worthwhile Sunday afternoon. (Dennis Polkow)