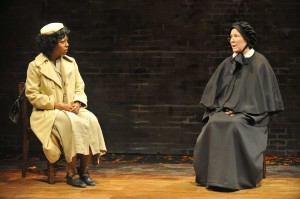 Kicking off their twenty-eighth season, American Theater Company embarks on a spiritual journey in the aptly titled repertory-style production of “Doubt” and “Agnes of God.” John Patrick Shanley’s 2004 play “Doubt,” in which a nun suspects a priest of molestation, garnered the 2005 Pulitzer Prize and had a lengthy run on Broadway. The lesser-known “Agnes of God” by John Pielmeier was originally presented on Broadway in 1982 and tells the story of a young nun accused of infanticide.

Under the direction of PJ Paparelli, the back-to-back plays begin with a briskly paced “Doubt,” led by Kate Skinner, who gives a strong performance as Catholic School principal Sister Aloysius. Skinner’s sharp coldness takes command of each scene and the audience isn’t likely to be left with any doubt of her suspicions. Sister Aloysius meets her match in the play’s most intense scene between herself and the suspected victim’s mother Mrs. Muller, played by Penelope Walker. The accused Father Flynn is played competently by Lance Baker, who occasionally delivers Shanley’s witty lines rather illogically. The naïve Sister James is played by Sadieh Rifai, who does her best to physically embody her character’s eventual corruption.

With a decidedly eerier tone in staging, the women of “Doubt” take on new characters in “Agnes of God.” Penelope Walker takes control of this play in her role as the unbending, atheist psychiatrist Dr. Livingstone, who is assigned to determine Agnes’ sanity. Walker’s zeal for her character often got the better of her and occasionally she flubbed her lines, but at no sacrifice of authenticity. Sadieh Rifai’s performance as Agnes is gripping and haunting, gradually becoming more disturbing as the details of her troubled past unfold. Kate Skinner takes up the role of Mother Miriam and is equally as feisty in this play.

Scott Davis’ scenic design is slightly reminiscent of any production of “The Crucible.” Davis’ staging, however sparse, is deeply symbolic, moving from autumn to winter between “Doubt” and “Agnes of God.” Both plays are shrouded in mostly blacks and whites but are broken up by the red of fallen leaves and burning prayer candles. Costumes are meaningful here as well: Agnes is seen in a white habit, indicating her supposed purity.

ATC conveys both the similarities and differences between these two Catholic-themed works. Whereas “Doubt” seems to skirt the issue of religious faith entirely until the end, “Agnes of God” is ultimately the battle between believers and non-believers. “Doubt” has an inherent mathematical sterility and plays out more like a trial than a story, leaving its ending intentionally ambiguous (though ATC’s production seems to have made up its mind about Father Flynn’s guilt). “Doubt” comments more on the flawed educational system in the United States, showing that ultimately the child suffers when teachers squabble. “Agnes of God” is a richer play with more poetic lines and a more satisfying conclusion. Both plays are entirely engaging and make perfect sense together in this repertory, but unfortunately both plays suffer from clunky endings that could have been made sharper. “The Catholic Repertory” at American Theater Company leaves its audience shaken but provoked, and is certain to inspire dialogue about faith and the institution of religion in the modern age. (John J. Accrocco)