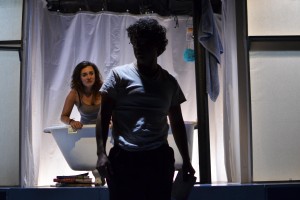 Playwright Elizabeth Meriwether loves pushing the limits of plausibility—a gleeful hobby she pursues in some of her plays more successfully than in others. The playwright’s best-known work, “Heddatron,” sees a conspicuous gang of robots kidnap a housewife and force her to perform Ibsen in the jungle. Offbeat, perhaps. But who among us hasn’t interrogated Siri or kicked around an automated circular vacuum cleaner before? Realistically impossible, “Heddatron”‘s robotic magic in tandem with the play-within-a-play convention provides an irresistible je ne sais quoi that easily lures in an audience.

But “The Mistakes Madeline Made,” receiving a Chicago premiere by LiveWire Chicago Theatre, includes a few too many robots. In this prickly and predominantly laughless comedy, the robots come in the form of Ablutophobia—the fear of bathing—misguided class commentary, and hugely overwritten and overplayed characters—a girl having promiscuous sex to retreat from unbearable pain, a love-challenged, idiosyncratic geek, a hyper-judgmental coworker. “Madeline”—wackiness being its defining characteristic—resembles a lesser work of Christopher Durang, but is removed of Durang’s satirical genius and linguistic panache. Durang deftly weaves politics and social commentary into the fabric of his quirky ditties, but Meriwether’s humor and stances exist separately of each other. Those battles include anything from femininity (the title comes from a quote from Dr. Joyce Brothers’ “What Every Woman Should Know About Men”) to America’s wars in the Middle East—but they are all hindered by hyper-animated characterizations and a late-to-the-party injection of soupy sentiment toward the play’s end.

Containing the playwright’s overbearing hodgepodge of theses is a hypnotically watchable story, guided with clarity by director Krista D’Agostino. The watchability is unsurprising. Meriwether’s day job is television writing, and network television’s paint-by-numbers, easily digestible sequence of events is present here. Though I never felt a strong connection to the young college student, Edna (a wry, mostly genuine Hilary Williams), or her new assistant job in the immediate aftermath of her brother’s death, I felt compelled to remain invested—if only to figure out what the play’s mystifying intent is.

The rebellious and disturbed Edna becomes one of fifteen assistants to an obscenely wealthy clan that never appears onstage. Her immediate supervisor, Beth (Kristin Collins colored with intrigue, but cartoonish), flitters about with a plastered-on smile that suppresses a rage that unleashes itself when a task isn’t done quite right. Never ever lay a finger on the handy wipes for the little boy’s snack bag! Edna’s brother, Buddy (a sensitive and shy Joel Ewing), whose death is revealed early in the play, occupies her bathtub for much of the ninety minutes in some unacknowledged ghostly embodiment. He had been writing in Pakistan when he died, and, now residing in the porcelain tub, occasionally rattles off condemnations of the United States’ consumerist focus on cellphone pictures and pets over the world’s true traumas. Though inhabiting a bathroom (placed prominently upstage by scenic designer Inseung Park), Buddy refuses to actually bathe—a habit that Edna acquires as well.

The girl’s uncouth sexual and hygienic routine becomes her primary defense mechanism for coping with Buddy’s death. Unfortunately however, her noxious odor and observable uncleanliness harms a new innocent flirtation with Wilson, an office nerd with a proclivity for arbitrary noisemaking. The dominant attribute of each character, it seems, is brought on by worldly burdens and hardships, and is all the more amplified by working tirelessly to make their wealthy clients’ lives grander. But the interplay of those eccentricities with Edna’s declining mental health and the play’s overarching sitcom sensibility makes for one unappetizing psychological omelette. LiveWire seemed to have found its footing with “Oohrah!” during the Steppenwolf Garage Rep in February—putting their money on simplicity and no-nonsense directness. But “The Mistakes Madeline Made” is a slow retreat back to loony frivolousness. (Johnny Oleksinski)