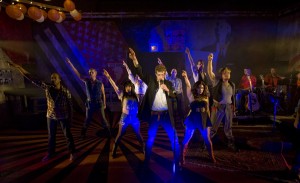 After a brief run on Broadway in 2010, “Bloody Bloody Andrew Jackson” is making its Chicago debut in a vivid production by Bailiwick Chicago. With a presidential election looming, there couldn’t be a more appropriate time for this political musical which pairs Andrew Jackson’s rocky legacy with punk-inspired music and costumes. Bailiwick has a knack for unique productions of offbeat musicals and this is no exception.

This is a great ensemble piece and the women of this show take the wacky carousel of characters and make them work. Judy Lea Steele in the part of the Rascal-ridden Storyteller walks (or scoots) away with most of the plentiful laughs, even if her part is sort of irrelevant. Leading the female ensemble in the role of Mrs. Andrew Jackson is Samantha Dubina, whose character is one of few given enough depth to really showcase her talents.

The male ensemble struggles to distinguish the multiple historical figures being portrayed. For some reason, all of the male characters are played as gay stereotypes, a choice not written in the script, and the result is somewhat degrading. Matt Holzfeind as Andrew Jackson is both funny and intense as needed and his performance is one of the more exciting aspects of this work. Holzfeind’s dramatic abilities shine in a later scene in which he must make the defining decision of his presidency.

For those who have been anticipating the regional premiere of this show, director Scott Ferguson’s creative staging at National Pastime Theater surely won’t disappoint, but those unfamiliar with this cheeky musical may struggle to see the appeal. Even with Bailiwick’s cast of talented singers, the short list of forgettable songs seem inconsequential to the plot and are rarely pleasing to the ear. The dialogue itself is funny and usually on target in its satirical look at American history. Writers Michael Friedman and Alex Timbers have crafted a well-meaning but rather unbalanced version of Andrew Jackson’s life, and it mostly comes off as a sarcastic high-schooler’s report. The book seems to be trying to make deeper statements but the points are obscured by all the shtick. Unfortunately the connection between the emo genre and the seventh president of the United States is never quite explained, asking its audience to question why this story needs to be told in this format.

Despite its flaws, “Bloody Bloody Andrew Jackson” is one of Bailiwick’s best productions and its sheer energy should be commended. Without the endurance of their fresh-faced cast this show would not work. Christopher Pazdernik’s well-rehearsed choreography against Nick Sieben’s artful scenic design is spectacle-theater at its finest and for that “Bloody Bloody Andrew Jackson” is certain to make a splash this election season. (John J. Accrocco)