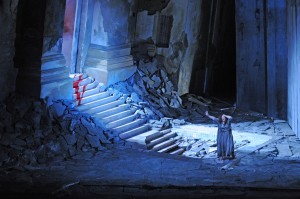 It has been twenty years since Richard Strauss’ “Elektra” was last presented by Lyric Opera: there was plenty of blood that time around, and Scottish director Sir David McVicar gives us new and improved blood in this splashy new production which is opening the Lyric season, Anthony Freud’s first as general director. The motif of John Macfarlane’s set of magnificent ruins even spilt over to the foyer where opening-night black-tie patrons were sipping champagne and sampling hors d’oeuvres underneath precariously hanging chandeliers and slanted columns.

“Elektra” is a harrowing night of musical theater that, although only a single act, is so intense that one is as emotionally exhausted as if the action had lasted a lifetime. Not that the opera moves slowly—anything but—or that it is uninteresting. It is fascinating, but like Elektra’s own hatred and wishes of vengeance, it is consuming.

The music is arguably the most daring of Strauss’ long career and is really a vocal extension of his celebrated tone poems. It calls for one of the largest orchestras in all of opera and Strauss exploits a wide palette of orchestral tone colors. The piece is as seducing in its beauty as it is harmonically adventurous, qualities which Sir Andrew Davis emphasizes, revealing its unique place extending Wagner’s expansive chromaticism while also pre-figuring Schoenberg’s breakdown of tonality. Clearly Davis is choosing to emphasize the latter more than the former, much the way Boulez likes to do Mahler as a precursor of what is to follow rather than as a culmination of what has preceded it. There are moments where that effect becomes coarse, but not inappropriately so. 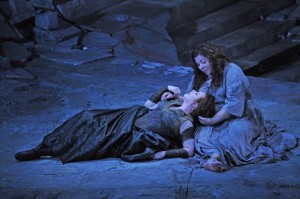 The role of Elektra is one of the most demanding of any in opera. Not only must the forlorn Greek princess be heard over the massive orchestral texture, but she is onstage virtually the entire opera encompassing mezzo to coloratura passages, evoking every shade of pathos. In a dazzling Lyric debut, American soprano Christine Goerke, in only her second Elektra, revealed an instrument of remarkable power and expressiveness and formidable technique: clearly this is to be a signature role and we are immensely fortunate to experience it at its genesis. It will be fascinating to see where Goerke will take this role in years to come. The thunderous standing ovation for her at opera’s end was instantaneous and well-deserved.

No less important is the role of Elektra’s sister Chrysothemis, stunningly rendered by Ryan Center alumna Emily Magee and who was able to differentiate her characterization from Elektra while still offering a pleasing transition in their long scenes together. The two singers’ chemistry was electrifying.

The Freudian aspects of the work have seldom been more apparent, the stairs of the palace spilling forth blood which Elektra uses to bathe in during her victorious Totentanz. The challenge of the current production is to have each of us consider the possibility that there just may be a bit of Elektra lurking beneath the surface of us all. (Dennis Polkow)