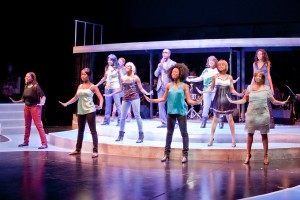 Sure the premise—a televised singing competition a la “American Idol” centered on the works of legendary “one-name-only” R&B divas like Aretha, Whitney, Gladys, Beyoncé, etc.—is not especially groundbreaking. Nor is the backstage drama and dialogue pushing any envelopes. But the show’s a polished, uplifting pleasure, with one of the best-looking sets I’ve seen at Black Ensemble Theater (via scenic designer David Ferguson), not to mention the creative use of video (Michael Stanfill, video designer) and a tight execution of the premise that viewers are a “studio audience”—complete with input into the show’s winner each night. The whole package elevates what makes this theater so special: powerful singing, a swinging band led by Robert Reddrick and an audience so engaged that the place should just be called the Theater of Joy. You’d have to be a helluva misanthrope to walk out of here without a smile on your face.

This show marks the writing-directing debut of founder Jackie Taylor’s protégé, Rueben Echoles, and he sticks to the theater’s tried and true. The nature of the show, though, means the injection of quite a few new or newish voices and faces among the strong but increasingly mature ensemble, and that’s a treat. Candace C. Edwards’ Marylin is a bitchy diva who can hide neither a heart of gold or a voice of gods, and Lisa Beasley’s “ghetto” kid Tanika shows off pipes and persona powerful enough to win the real “American Idol.” They hold their own with favorite veterans Katrina V. Miller and Dawn Bless and, trust me, that’s something. (Brian Hieggelke)