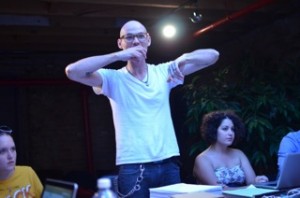 Sean Graney was not content with “Seven Sicknesses.” It seems that his successful and now traveling adaptation of every Sophocles tragedy merely opened a can of worms—extremely long, bloody, cathartic worms. He wants to go bigger, up to the adaptation of every extant Attic Greek tragedy, to compose a two-part day-long epic event. The script, already read-through by a group of Graney loyals and at a whopping 650 pages, could be a masterwork. Or it could be a pain in the ass for the eternally seated audience.

I chatted with Chicago’s tragic laureate about his penchant for Grecian blood.

You have adapted Sophocles, in his entirety, into a play. Apparently that went over well for you, because this project is much bigger. Care to explain?
I am adapting all thirty-two surviving Greek tragedies into one large epic play.

That is huge. The script is 1,000 pages, right? How long has it taken you to write that?
I have been working on the script consistently for the past seven months. The first draft of my work, which took about four months, was 1,250 pages. After a reading and a few more months of work, I managed to edit the script down to about 650 pages.

If you could compare it to anything you have seen done before, what would you say this is most like in scope and length?
I don’t think there has been anything quite like this before, but I am reminded of Peter Brooks’ “Mahabharata.” In length, recently “Gatz” [the unabridged staging of “The Great Gatsby”], but “All Our Tragic” is twice as long.

It’s as if you’re getting closer and closer to the original format of a Greek theater festival. What about that style of presentation is attractive to you?
It is very appealing, mostly the idea of the creation of a community among each audience, a community that experiences the plays together and discusses the plays together. These plays were present at the birth of many democratic ideas. I would love for this event to re-introduce that idea of community dialogue.

I read on your blog that you needed to gear up to do a read-through yourself, that it would take a day or so…
I never did this. I ran out of time before the first reading with my actor friends.

How did the read-through with your actor friends go?
It went really well. It was an amazing two days. We all met for eighteen hours total, six hours on Friday night and twelve hours on Saturday. I bought lots of meals and drink for people. We had some great guests listening to the reading and adding to the discussions. It was one of the most rewarding theatrical experiences of my life. As I say that it sounds exaggerated, but it really meant a lot to me.

And how long was the reading part?
The script itself in that draft was twelve hours of solid text. 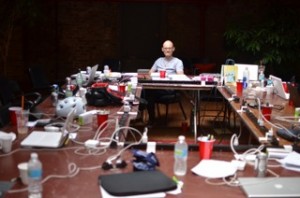 What possessed you to start this project? Was “Seven Sicknesses” not big enough?

I was inspired by the success of “Seven Sicknesses.” I started working on a few other conjoined plays, including some Chekhov, which went nowhere, “Hroswitha of Gandersheim,” which is awesome but too obscure. Then I started working on adapting the seven Aeschylus plays. When I went back to the Greeks, it felt good. I also realized that, while working on “Seven Against Thebes,” the information gathered in that play would have helped bridge a gap in my Sophocles plays. Then I thought, there are only thirty-two surviving tragedies, I bet that I could adapt all of them and bundle them for an audience.

It’s great that you have found such a rewarding enterprise, which is fairly obvious from your enthusiasm on the blog allourtragic.com and from this conversation. In such a lengthy work, and with all the time put into it, what are the grains you want the audience to get out of it?
I want people to be able to experience these plays that are the root of all our drama. To realize that most of our struggles as a society have been happening since the beginning.

Are you hoping for Aristotelian catharsis, as one journalist wrote about your “Seven Sicknesses,” or is this looking for something else?
That is a good question, but it is hard to answer. I think catharsis is always something to strive for, and in such a long experience one would need to employ all aspects of drama.

What kind of venue and circumstance would you want “All Our Tragic” performed in?
I had originally thought it would be at, like, some resort a few miles outside of a major city, where it is performed over three days, and you house and feed people, you can only have one show a week. But while talking to some people they showed me the slight flaw in the business model… unless you are selling several thousands of tickets a weekend, which would make intimacy in performance difficult. Or you could sell tickets for a very inflated price, which would deny access to a lot of people. So now it is geared toward being performed in any theater with enough space to lounge and eat at intermissions. Also with edits, the entire script can be performed in one thirteen-hour day, or in two parts, roughly seven hours each day.

What kind of cast do you envision?
Lots of energy, committed, intelligent, funny and versatile.

Design would be difficult too. A lot of this is hard to imagine for me. Can you paint a picture of the ideal performance itself?
I had set my Sophocles plays in a hospital with a chorus of nurses that helped the action. It was impossible to find a unified allegorical location for this script. So it is set in an office/warehouse and the chorus members are called Odd-Jobs. In my head the space deteriorates over the course of the event. Costumes: I think mostly modern is best. There are lots of songs written into the script. I did not write lyrics, just song titles, that the Odd-Jobs sing. The performance space would be comfortable for audiences, hopefully allowing them to stretch out and take their shoes off. There are many intermissions and meal breaks written into the script, hopefully giving people plenty of time away from the plays to build relationships with each other.

What kind of through-lines did you find to construct this three-act beast?
Oh my goodness, well, now it is a two-part beast, with four sections, nine acts, twenty-three plays. Yikes. The first part deals with Oedipus, Theseus and Herakles. The second part deals with the Trojan War and all the Orestes plays. To begin to discuss how all the stories tie into each other would be almost impossible over this conversation. But every play could stand on its own, but also fits into a much larger narrative. Some plays set the narrative structure, and other plays had to be massaged into that narrative structure. But they all fit into a large puzzle. This has been the most rewarding work I have done in my life and I really hope to be able to share it with an audience.

Sean Graney hosts a reading of the current “All Our Tragic” draft at the grand opening of the Reva and David Logan Arts Center, 915 East 60th, Saturday, October 13 from 1pm to 1am.