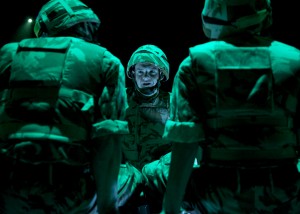 In the cavernous space of the Broadway Armory, “Black Watch” feels both massive and intimate, at once communicating the tedium and (sometimes literal) explosiveness of war. Following members of a Scottish infantry battalion—the titular Black Watch—as they recount and relive their experiences in Iraq, Gregory Burke’s script, based on interviews with former soldiers, intersperses authentic dialogue (there can’t be another play that uses the C-word with more frequency), captivating live music and stirring choreography to deliver an emotional punch that lands on multiple levels. The atmospherics are impeccable, with Colin Grenfell’s electrifying lighting, Leo Warner and Mark Grimmer’s multi-faceted video design, Gareth Fry’s booming sound design and Laura Hopkins’ sleek and simple set compounding to highlight the mood of the piece and direct focus to the strength of the performers. Tony-winning director John Tiffany has a powerhouse cast on his hands and he pulls subtle, comedic and heart-wrenching performances out of them all. (Zach Freeman)