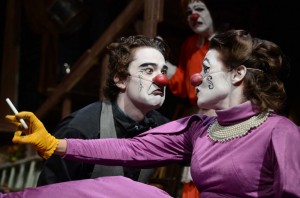 Fear is always lurking in the absurdist comedies of 1950s Europe. With a populace facing a daunting reconstruction in the shadow of two World Wars, how could it not be? Dramatists like the Romanian Eugene Ionesco with his 1959 “Rhinoceros” and the Swiss Max Frisch in his 1958 play, “The Fire Raisers,” jumped atop the paranoia with an artist’s verve, interpreting the terror of their surroundings in a style that would later become known as Theatre of the Absurd.

But Trap Door Theatre is taking Frisch’s absurd play, titled “The Arsonists” by English adaptor Alistair Beaton, one maniacal step further in its presentation. Guest director Victor Quezada-Perez, the artistic director of Parisian company Cie Umbral, brings his masterful expertise in the art of clowning to this mesmerizing and disturbing production in which each and every character is based in the European clowning tradition—white-faced with red nose and dazzling eyes. Beware ye who enter here. Abandon your preconceptions of a happy-go-lucky Bozo. The exaggerated character clowns of Quezada-Perez’s production are not mere circus sideshows, but each fully embodies and amplifies a particular attribute—a maid’s swaying hips, a wife’s affected speech, an old woman’s knitting. And what better way to capture rampant irrational fear than with a pack of mischievous clowns.

Evil has a sickly way of distracting us from its true intentions—idle hands notoriously being the devil’s playthings. Frisch’s two Mephistopheles, the titular arsonists, have run amock on a fiery spree. With devious grins, Schmitz (a fidgety David Steiger with a voice like Orson Welles) and Eisenring (Michael Doonan playing the brand of clown that haunts dreams)—or Joe and Billy—enter middle-class victims’ abodes as helpless but charming homeless men with tragic stories of brutal family lives. And, taking advantage of a family’s selfishly charitable hypocrisy, they burn their house to the ground. 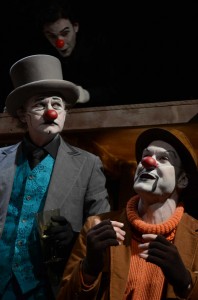 The unlucky bourgeois victims of “The Arsonists” are the Biedermanns—Gottlieb (Bob Wilson), an abrasive, cutthroat businessman but a caring husband, and Babette (Tiffany Bedwell), his suspicious though easily swayed wife. Every person onstage—the Biedermanns, the arsonists, the maid, the heralded chorus of firemen—breathe audibly and deeply in the middle of their spoken phrases. Sometimes the effect is humorous like the maid’s (John Kahara) repeated “Mr.—breath!—Biedermann.” But more unnervingly, the constant inhalations transform into a nervous collective wheeze, the characters perpetually worried they may be overheard or, even worse, that they’ll say the wrong thing.

Clown performance is akin to mask in that once the persona is donned, the character rules the actor. I was rather transfixed by the sheer quality of acting on display in set designer Mike Mroch’s old-world attic. Clowning requires a level of commitment and physical elasticity that the acting we are most accustom to does not, and the amount of genuine anticipation and anxiety that Trap Door’s ensemble is able to cultivate is a pleasure-pain to experience. Biedermann knows early on that Joe and Billy are, indeed, the arsonists that have the town paralyzed in fear, but he  allows them to stay in his home anyway. Eventually they need no longer coerce and deceive the patriarch. Gottlieb gruffly laughs along with Billy as the duo measures out the fuse wire to set his own home ablaze.

How can evil, so obviously staring Biedermann in the face, gain his willing complacency? When Frisch wrote his play, that snakelike evil was Nazism and Fascism—incomprehensible movements that, in their own way, gained their victims’ trust and set fire to their homes. “The Arsonists” at Trap Door  conjures up scary but demonically funny ponderings of the sneaky forces in our own lives that, if left unattended, could lead to our imminent destruction. (Johnny Oleksinski)