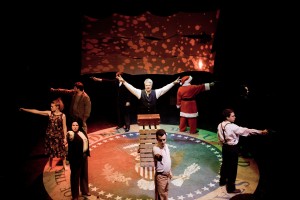 Stephen Sondheim’s musical “Assassins” walks a mighty fine line between parody and serious drama. That’s where it gets its edge. The tension of that invisible circus tightrope is the propulsion mechanism of the sardonic 1990 pastiche of loosely connected scenes and songs with a book by John Weidman. And, in order for a production to be successful, it must brave its crippling acrophobia. But if a production moves its weight too much to one side, the tone becomes wobbly, confusing and uninteresting. Occasional giggles that escape the audience’s lips are only meaningful if they come with an aftertaste of guilt or uncleanliness. “I can’t believe I just laughed at that!” When “Assassins,” premiered, after all, it had been only nine years since the near-assassination of Ronald Reagan and fifteen since the attempt on Gerald Ford’s life—relevant national stains. With “Assassins,” Sondheim and Weidman were not aiming for a lackadaisical skip through the park.

Director Billy Pacholski’s new production, which opened on Friday night at the Viaduct Theater to an alarming flood of non-stop laughter, is little more than a political comedy, at times overtly skewering the forgotten historical figures and falling far short of the musical’s dramatic potential. Such a performance is, no doubt, the easier road. These assassins—especially those who failed in their attempts—inspire vicious scorn and plenty of guffaws. Their names might ring a faint bell, but their likenesses and stories will probably be new to the non-history buffs sitting in the theater. Really, other than Lee Harvey Oswald, no assassin gained the desired cultural notoriety of Brutus, leaving them viewed as nothing more than pathetic, disturbed, silly screw-ups. But they mustn’t be played that way. Each person thought their cause just, and that dream, however morbid, that they so fervently held onto is what humanizes them in this play. “Free country! Means they listen to you. Scream and holler! Grab ’em by the collar!” writes Sondheim. Other than Aram Monisoff’s Leon Czolgosz, as ferociously determined as he is troubled, this historical band of misfits resides squarely in the hapless realm of caricature. 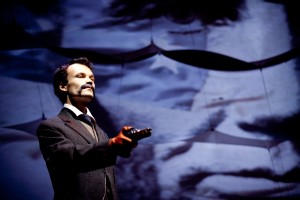 Some of that lightness is an after-effect of the thrust staging, which, lacking any decisive sense of time or place in the century cycle of scenes, renders the sequences into non-specific sketches. The dominant atmospheric touch that endeavors to spice things up is Frank Mares’ projections, which, through their spastic overactivity, contribute only distraction as they contort and pulsate for no apparent reason. Besides Mares’ videos, the cast manipulates an assortment of wooden crates to establish different locations—and, being wooden crates, they best serve the early-twentieth-century scenes in which wooden crates might logically appear. It’s no wonder that Nick Druzbanski’s Santa-suit-wearing Sam Byck and Edward Fraim’s egotistical Charles Guiteau come across a touch forced. Inhabiting a nondescript canvas, most of the cast expands the size of their performances to such an extent that sympathy—or any shreds of empathy—cannot really be achieved. And the dramatic moments just do not land.

Where this mostly off-the-mark production does, indeed, impress is the cast’s vocal abilities. Though, as the Balladeer, Sam Button-Harrison’s biting modern commentary on the actions of these wannabe footnotes is left to simmer, his singing voice is crisp and pleasant. The same could be said for Kevin Webb’s chilled-out John Wilkes Booth. While the actor is wiry and made to appear gaunt, his voice is surprisingly full and deep-rooted. I do wish the actors, not visibly miked, had been as loud as the many deafening gunshots they fired in such close proximity of my eardrums. Their lack of amplification enables a cool natural blending of voices, as a choir, but during powerful introspective numbers like “Something Just Broke”—which this production has brazenly and unwisely moved from penultimate number to opening song—the mutters of shock and dismay are difficult to understand unless the actor is nearby.

Beyond the obvious reality that “Assassins” concerns American presidents, its themes don’t quite jive with the concurrent election season. Projected images of all forty-four presidents during the pre-show confides a rather  disconcerting message, I felt. The musical does quite ingeniously explore darker facets of the American Dream and the lengths at which a political dissident might go to get some attention, but this is a secluded bunch of wackos. “We’re your family… Make us proud of you,” they sing as they egg on Lee Harvey Oswald while he considers killing President Kennedy. This is a unique, non-judgmental collection of stories about the personal pressures that, in this handful of cases, brought a person to shoot a sitting president. But relevant political commentary, it is not. (Johnny Oleksinski)