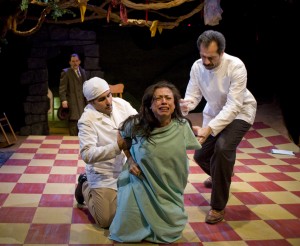 If a play’s quality was determined solely by the purity of its creative team’s intent, few pieces of theater would soar to the heights of “Night Over Erzinga.” But, of course, there’s a bit more to it than that. Adriana Sevahn Nichols’ new play, which opened on Saturday afternoon at Silk Road Rising, suffers from an overabundance of ambition on the part of the playwright. Clocking in at nearly three hours including a ten-minute intermission, Nichols’ sweet story of three generations of an Armenian family endures its exhausting length only to reinforce the well-tread theme of timelessness of family and the repairability of family bonds. But alas, the tale, itself, dramatically more intriguing and excitedly staged in its first act, becomes complicated and somewhat difficult to love in its winding but neatly wrapped second half.

The unfathomable atrocity of the Armenian Genocide is the catalyst of Nichols’ drama that pits cultural heritage against assimilation and the family’s continuance against the individual’s dream. There really is a lot of fighting on display. Though the playwright’s actual family ties to her characters coats much of the play with a tartly sweet nostalgia, the majority of scenes end in either bitter, screaming confrontations or sweeping cinematic romance. The repetition of that broad-strokes pattern lends itself quite appropriately to the old-world whimsicality of the first act, which spans 1913 until shortly after the 1929 stock market crash, but numbs the senses as the play moves forward.

Alice (Sandra Delgado) and Ardavazt Oghidanian (Levi Holloway) separately flee the dangers of Armenia to the cozy inactivity of Massachusetts where they discover each other one evening on a snowy street—in a scene that might be subtitled, “When Ardavazt Met Alice.” The attractive couple marries and, while at first innocent and full of promise, after giving birth to Aghavni “Ava”—not the son the chauvinist Ardavazt had in mind—Alice’s mental health begins to deteriorate. As she furiously scrubs her spotless checkered floor—”Out, damned spot!”—her cold anxiety appears to come from a combination of her husband’s old-country worldview on the role  of women and her own gnawing memories of the injustices committed against her family by the Turkish soldiers back in Erzinga. In an effort to retain normalcy, Ardavazt absentmindedly agrees to electroshock therapy for Alice and, as a result, her already frail identity slips ever further away. 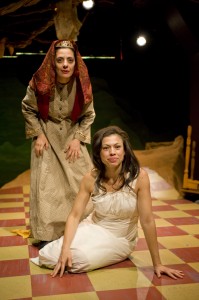 Director Lisa Portes has underscored the tumult of those events with stylized deluges into the pair’s childhoods back in Armenia, accompanied by verbally and physically expressed poetics. Under Lee Keenan’s web of metaphoric tree branches, Nichols’ Alice actually bears a passing resemblance to Lewis Carroll’s—this Wonderland, however, far more treacherous. But during the second act, as adult Ava (also Delgado) strays further away from her Armenian background—cooking meatloaf for her Dominican opera-singing husband, Bienvenido (Nicolas Gamboa)—the play’s style, itself, transitions to a domestic naturalism. Ava ran away from her mother and father to New York City after Ardavazt (in the character’s old age, Rom Barkhordar) sternly condemned her dream of singing and dancing. And, with the burden of silence on their shoulders, the second act sees a father and daughter’s reunion after fifteen years, as well as the birth of Ava’s own daughter, Estella.

Forty years—and considering that we become briefly acquainted with the adult Estella, perhaps even more—is a hefty amount of ground to cover in a single performance. And part of what makes the three-hour play so difficult to absorb in a single sitting is its lack of acknowledgement for period. Outside of Elsa Hiltner’s time-evoking costumes, the actors’ attitudes, postures and vocal affectations are unchanged from yearly shift to shift. The acting—especially from the deep feeling Delgado and the protective and soulful Carolyn Hoerdemann, quickly becoming a favorite stage presence of mine—is otherwise quite palatable, but without those subtle changes as the calendar pages get folded back, “Night Over Erzinga” cannot impart the enormity of the obstacles this family has had to overcome and the golden places they will go. (Johnny Oleksinski)