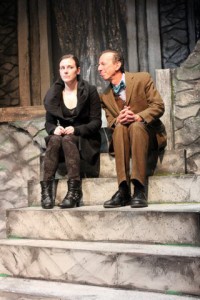 It’s Christmastime in London and if the serial killer on the loose doesn’t take you out, the deadly plague that’s quickly spreading across town certainly will. WildClaw Theatre’s latest horror show is an ambitious endeavor, adapted by Charley Sherman from a thirty-six-page Clive Barker short story of the same name. “The Life of Death” follows Elaine Rider (Casey Cunningham) as she recovers emotionally and physically from a recent surgery that ended in an unexpected hysterectomy. Despondently watching the demolition of an old church, she meets the unconventional but professorly Kavanagh (Steve Herson, at once endearing and off-putting) and finds herself drawn to sneak into a crypt hidden beneath the church, where she comes across a (strikingly staged) mass of twisted, bloody corpses. As people around Elaine (friends and strangers alike) start dropping in increasingly gory fashion, she feels the presence of death in her life… and is oddly rejuvenated by it.

Overall, this is a competent production buoyed by John Wilson’s impressively imposing set and some masterful makeup and gore effects, but director Carolyn Klein’s pacing slows the momentum a bit too much to keep it engaging (particularly in the first act). Numerous film clips drag out the running time and some philosophical touchpoints from the source material don’t translate well to the stage. There’s potential for a genuinely thought-provoking horror show here, but it needs some polish.  (Zach Freeman)