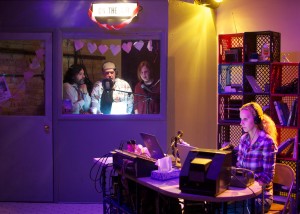 What begins as a spat between a small-town DJ and his female producer quickly turns into a battle to stay alive in Strawdog Theatre’s production of “Pontypool.” In a small town just south of Chicago, on a particularly blah day, a virus appears to be rapidly spreading, turning its victims into zombies. Based on the successful 2008 Canadian film, which was based on a novel by Tony Burgess, “Pontypool” has been further adapted by its author for the stage and makes its Midwestern premiere this Halloween season.
In the tradition of radio plays, once popularized by Orson Welles’ legendary “War of the Worlds” broadcast, “Pontypool” is contained to a radio studio. Contained is not to say restricted, because as the tension mounts many clever devices are used to sufficiently creep out the audience.  It’s often what isn’t showing that has the strongest effect in this modern take on staged radio drama. As the world outside turns chaotic, the radio team continues to receive live updates from victims shortly before their deaths and the imagery conjured is quite disturbing. Between callers, familiar radio ads like the ever-cheerful Luna Flooring jingle play in the background and the contrast is an interesting technique.

While half the cast is made of mere voices, the small on-stage cast is pretty strong. It’s an underestimated task to convincingly talk on the phone while in character, and Elizabeth Dowling does an excellent job at it in her role as station producer Sydney Briar. Jamie Vann plays big-talking Grant Mazzy and his quick turn from loveable morning-show host to terrified survivor is chillingly realistic.

Running just sixty minutes, “Pontypool” is as much fun as a trip to the haunted house. While it may not garner any awards, the thrills run high and it’s a definite good time for those looking for a late-night horror show. Performances begin at 11pm on the weekends, and there’s a well-stocked bar, so as far as Halloween attractions go, who could ask for more? (John J. Accrocco)