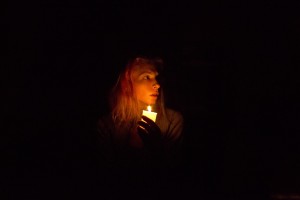 The atmosphere for this superbly haunting piece of Halloween fare is firmly established from the moment you’re guided by hand from the dimly lit lobby through the cramped and darkened theater and into your seat. There’s no casual conversation with the audience member next to you as you take in the cluttered living space that you’ve just entered, only a slowly growing feeling of dread, which is heightened as the show suddenly starts and a terrified young woman haltingly takes the stage.

As Anna, a timid special-education teacher trapped in her house and hunted by her fellow townspeople for something she may or may not have done, Megan Merrill gives a quietly powerful tour de force, nervously pacing her tiny living room and occasionally giving us glimpses of the inner strength this broken character may have once possessed. Not too far into this fifty-minute whirlwind, as Anna describes the comings and goings of her tormentors, we start to wonder whether or not she is a reliable narrator. Jeremy Menekseoglu’s darkly engaging script is clever enough to provide the question and Merrill is multifaceted enough to keep the answer from being obvious.

Psychological terror is as prevalent here as the more conventional scares provided by the spooky sound and lighting design. As the title suggests, Anna is indeed submersed in darkness on more than one occasion, with the only light provided by a flickering candle or a cell phone (brilliantly eerie). But Anna is also immersed in psychological darkness, and this is the darkness that haunts long after you’ve left the theater.

The one thing that keeps this show from attaining horror perfection is the abrupt ending, or lack thereof. After such a seamlessly executed pressure-cooker of a show, Menekseoglu lets the final moments fall off anti-climatically. “Anna, in the Darkness” will keep you on the edge of your seat throughout, but the last few moments leave you slightly unfulfilled. (Zach Freeman)