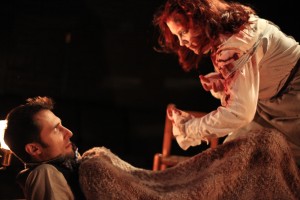 Just in time for Halloween, Strange Tree Group’s “Funeral Wedding: The Alvin Play” returns for an engagement at the Signal Ensemble Theatre. This gothic and drawn-out ghost story focuses on Alvin Fisher (Daniel Behrendt), a somewhat charming but odd recluse who chooses to live in (or maybe haunt) his family’s attic. Joining Alvin at times are his sister Anne (Delia Baseman) and parents (Jennifer Marschand and Ron Thomas). It goes without saying that family secrets go a long way in explaining why Alvin is the way he is. Also complicating matters is Anne’s new fiancé and family physician Robert Elliott (Scott Cupper) whom Alvin loathes to no end. There is much more to this tale, but to give away any more detail risks ruining the suspense.

Like a M. Night Shyamalan movie, a play like this is only as good as its ending and here playwright Emily Schwartz has crafted a great one. But the play is not without faults: the first act takes entirely too long to set up the premise and the second act also drags a bit. At the same time, the play often pleasantly surprises with Jess McLeod’s direction and the cast here, although always deathly serious, appears to have fun with the material. And although I did not completely understand the mute banjo player‘s role in the play, I enjoyed what his instrument had to say. (Noel Schecter)