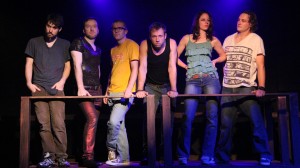 Renton (an affable, fucked-up Shane Kenyon) and friends Spud (Cameron Johnson), Sick Boy (Rian Jairell) and Tommy (Jay W. Cullen) struggle with heroin addiction. Favorite scenes are there, like Renton Searches for the Suppositories in the Filthy Toilet, dramatized in glorious vulgarity. But while the Missouri relocation tosses around neighborhood names for local color, it doesn’t explain the environment and what this crowd is running from.