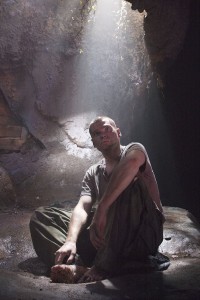 It’s always exciting to see a fresh play by a local author. Even more so when that play is executed as finely as TimeLine Theatre Company’s production of Susan Felder’s “Wasteland.” Performed nearly as a one-man show, “Wasteland” is the story of Joe, a U.S. soldier in Vietnam, who’s captured and confined to an underground cell. After months of solitude, Joe begins to hear the voice of Riley, a new prisoner, on the other side of the wall. An unlikely friendship sparks between the two MIA soldiers as they relate the stories of their lives and bicker over the bleak reality of their plight.

What Felder’s dialogue occasionally lacks in substance is more than compensated for in moments of grueling stage direction. Before the first lines are even spoken, the audience is given a lengthy glimpse at the everyday torture of being trapped in a hole and the desperate means it takes to stay sane in such conditions. As the ninety-minute play unfolds, you’re shown, rather than told, the waves of psychosis Joe and Riley go through in their insurmountable situation. Eventually the physical evidence of hopelessness becomes unbearable to watch as filthy water and grime collect on Joe’s clothes and body.

Impeccably cast as Joe, Nate Burger is both endearing and natural in his delivery, sometimes trailing off in a way that is frighteningly accurate to typical speech pattern. Burger has a heartbreaking way of staring off into the abyss that convincingly relays complex emotions rarely seen in young actors. In the significantly challenging role of Riley, Steve Haggard has to create an entire character from voice alone, as he is never featured on stage. Haggard succeeds admirably and provides most of the few laughs this play has to offer. Both actors are willing to be silly in the moments of boyish tenderness but also fearless in the heated exchanges about sexual orientation, politics and religion.

Director William Brown’s bold vision for this show would be an honor for any playwright’s work. The highly detailed set created by Kevin Depinet makes outstanding use of the TimeLine’s Lakeview space. The vividness of the rain and fog effects used here are a sensory feast and a great touch for such a daring show. Timeline is taking a big risk with this new work in that it’s challenging for audiences as well as graphic in language and full-frontal nudity. If only more small theaters would be as adventurous.

Though in the end, Felder leaves many things ambiguous, it’s to be expected in a one-act play and the result is no less satisfying for its vagueness. She takes her time, allowing the two men to first become intimate before they discuss politics that easily parallel current circumstances, an honest approach to realistic dialogue. There are a few slight anachronisms, like how long it takes them to give one another physical descriptions, but it only adds to the sense of delirium both men exhibit. In the end, it’s less about what is said and more about the psychological effects of battle and the ultimate question—does anyone actually win a war? (John J. Accrocco)