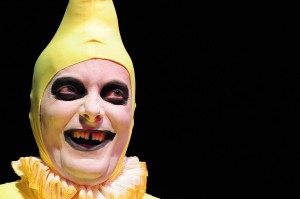 He’s back! Honeybuns, that gap-toothed, canary-yellow bouffon with a demented sense of humor and an insidious libido has triumphantly returned to his rightful place on the barren stage of Collaboraction. That’s right—no sets and no plot. Other than two oversized white hands, a deceptive gift and an eleven o’clock soapbox, Dean Evans, a masterful clown and Neo-Futurist, needs little more than his bustling person and a meticulously sculpted character to inspire an uproar of laughter and impart more clever wisdom than a Maya Angelou commencement speech.

After an abbreviated summer stint—”Honeybuns” was the unexpected hit of Sketchbook 12 Reincarnate—Collaboraction has wisely resurrected Evans’ seventy-minute love letter to the human psyche for the entire month of October to the delight of his devotees and to the dismay of clown-hating, narrative junkies. During the summer run of “Honeybuns,” this critic proclaimed it the “one true surprise I’ve had all year in the theater.” Well, I have certainly had a few gleeful shocks since that scorching July marathon, but still none quite like “Honeybuns,” the biggest, brightest present under the tree. 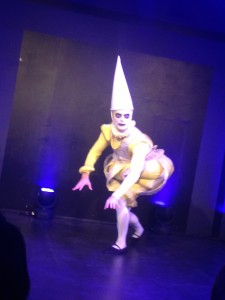 Honeybuns is billed as “The World’s Greatest Mime,” but that is a trap connivingly laid by Evans to take advantage of our expectations. An audience walking into the show expects the brand of mime they have come to know through popular culture or previous theatergoing—silent and, perhaps, with a dark Euro-twist. Well, Honeybuns is anything but silent. He speaks out loud in a musty English brogue, and his miming is only adequate. My intuition tells me that any miming deficiency that Honeybuns has is a purposeful choice by Evans. This freak, after all, is far more interested in you and I than he is in an invisible brick wall or a rope. “What we’re doing,” he says, “is learning to play with our fears.”

The meat and potatoes of “Honeybuns” are the delightful games the fool coerces his audience into playing. Do not fret over the audience participation, however. Honeybuns emphasizes, with sinister care, that you are not forced to do anything you do not want to do. But, chances are, you will do it anyway. Because no matter how intense your fears of being silly in public, there is a large yellow clown with donut hips onstage who’s far more ridiculous, embarrassing and garish than you could ever hope to be. So, give him a glimpse of a dirty picture on your cellphone. Stick your finger in his mouth. Read him a love poem. Because, in all likelihood, you won’t be doing any of those subversive things at work on Monday without taking the elevator a few floors down to HR.

Out of unquenchable curiosity, I’ve spoken to a smattering of people who have seen Evans’ performance in either incarnation, and each response describes a markedly different audience reaction and corresponding experience. Some groups are perplexed into silence by this bizarre man and keep constant tabs of their periphery, in desperate hopes of a stress-relieving cameo by Brian Dennehy. In others, more jawdroppingly, a girl might admit out loud to pleasuring a cat. Yes, that really happened. During the performance I attended, a sweet young guy confided in us that, as a student, he had an evening’s fling with a married, heterosexual professor. That guy’s family is probably not privy to such a  testimonial, let alone an audience of strangers. But working with, not for, the audience, Evans cultivates a bonding trust betwixt all parties that I previously thought impossible.

After that young man spoke up, the evening took a sharp turn for the wild—well-dressed, older patrons ran around playing tag, college students pretended to cry or faked death on the stage, and spontaneous bouts of writhing were ingeniously blended with Evans’ blissful moments of pathos and serenity.

Without revealing too much more, in the end, Honeybuns gives his audience an opportunity to stand up on a soapbox and speak whatever words they care to speak. At the performance I attended, every single person spoke on that soapbox—a remarkable and moving feat in an introverted society such as ours. As the speeches were coming to a close, we all-at-once noticed that Honeybuns was no longer there. He had quietly evaporated back into our imaginations, allowing us to take the final bow of the evening. With an audience unwilling to leave, the scene erupted into an excited, thirty-person dance party. Honeybuns says, “All I want is for you to not have any regrets.” No one did that night. (Johnny Oleksinski)