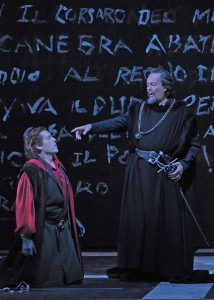 The Doge of Genoa is back. He doesn’t come around very often, so if you want an audience with him, now is a good time to do so or you may end up having to wait another decade and a half or so to catch him again. Even at a house with as Italian-centered a repertoire as Lyric Opera, Verdi’s “Simon Boccanegra” is a relative rarity. Lyric’s lack of confidence that “Simon” can give its audiences a complete Verdi fix is evidenced by the fact that it is actually the first of two Verdi operas to be presented this season.

“Simon” should be heard every so often and certainly needs no apologies musically even if the tortured libretto might have sunk the work forever after its disastrous premiere had it not been for its reworking by Arrigo Boito years later. Verdi’s publisher had organized a meeting between Verdi and Boito concerning “Simon” in the hopes that if they could work well together, the pair might go on to collaborate on an operatic adaptation of Shakespeare’s “Othello.” The rest, as they say, is history. Neither Verdi’s “Otello” or “Falstaff,” the crowning glories of his career and of Italian opera, might have come into being had Boito and Verdi not been able to work effectively on revising “Simon.”

Lyric’s current production originated in Covent Garden twenty years ago for Sir Georg Solti and Kiri Te Kanawa and was seen here fifteen years ago with the principals of that cast that can still be seen on the DVD of the original production. Ironically, Lyric’s own original and more elaborate earlier production can be seen on the Metropolitan Opera’s DVD with legendary hometown Verdi baritone Sherrill Milnes in the title role. 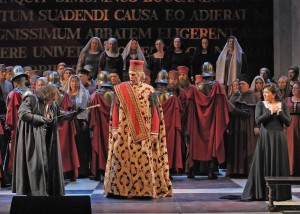 Although he seldom brings the ideal lyrical quality to the vocal aspect of the role and sometimes struts around looking ill at ease in his full Doge regalia (part of his portrayal, perhaps?), baritone Thomas Hampson does bring some unusually effective moments dramatically to the role. His Simon actually makes an effective emotional journey from the prologue where he loses his infant daughter to a tender father that rediscovers her a quarter of a century later to having to lose her all over again.

Although dramatically rather wooden by comparison and at least on opening night, singing somewhat unpredictably, Bulgarian soprano Krassimira Stoyanova made her Lyric debut as Amelia. Veteran tenor Frank Lopardo turned in one of his finest portrayals here as her beloved Adorno and elevated their love scenes.

But the real star of the evening was Italian bass Ferruccio Furlanetto who brought a vocal purity and tonal beauty as well as dramatic intensity and tenderness when needed to the role of Fiesco that, even taken alone, makes seeing this production well worth while.

Although we have heard glimpses of what Lyric’s new chorus master Martin Wright can do at Millennium Park and in one small offstage appearance of the chorus in “Elektra,” he has a chance to really shine here and his careful work adds much to the experience. Obviously an excellent choice and looking forward to much more of his work here in years to come.

With the news that Sir Andrew Davis has been engaged here through 2021, Lyric’s new management needs to address the fact that this is not a conductor with a particular affinity for Verdi given how central that composer is to the company’s repertoire. Tempos were erratic on opening night, balances sometimes coarse. (Dennis Polkow)