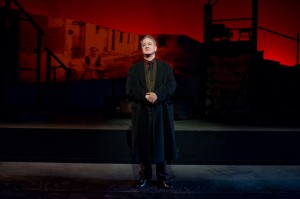 The fall 2012 selection for One Book, One Chicago, “The Book Thief,” is a terribly challenging story to adapt for the stage, and yet an unusually logical choice for a play. At about five-hundred pages, Markus Zusak’s hugely popular novel is packed airtight with event after event and a lineup of beloved characters, leaving only compact moments in a dramatization to absorb the nuances of these very special people. But it’s the author’s narrator, Death, who contributes a welcomed and surprising theatricality to an otherwise straightforward literary tale. Death’s simultaneous omnipresence and neighborly intimacy transforms the quality of his exposition into resoundingly personal and empathetic testimony, warm and believed by all. And who better to relay an infinite accumulation of wisdom than the sage Francis Guinan.

The most inspired decision director Hallie Gordon has made in her Steppenwolf for Young Adults production of “The Book Thief,” which opened on Saturday afternoon in Steppenwolf’s Upstairs Theatre, is the casting of ensemble member Guinan as the Kind-Spirited Reaper. As the actor leads the audience through young Liesel’s story—an orphaned German girl, she goes to live with adopted parents during the height  of World War II—he is awash in paternal caress and childlike discovery. The human race is constantly teaching Death new things, good and bad, and Guinan relays his findings without a hint of condescension, but plenty of fear. Guinan’s Death is, ironically enough, the most vibrantly alive of the characters in Heidi Stillman’s new adaptation. 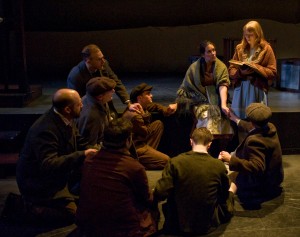 Another of Gordon’s wise casting maneuvers is the inclusion of Patrick Andrews as Max, a Jewish family friend who takes shelter in the Hubermann’s basement. The actor has the soft and stoic sensitivity of an old family photograph, which lent itself so well to the brusque worlds of “Red,” “The Iceman Cometh” and now to the bleak streets of Nazi Germany. Andrews is all at once comforting, grounded and totally lost as he inhabits the space below Liesel and her parents (Amy J. Carle and Mark Ulrich). Rae Gray plays Liesel, our book thief,  growing and maturing in a world caught up in a sharp temporal regression. The actress has a knack for teenage angst and, here, she lets loose that recognizably vicious rage against the unfairness of her circumstances. But Stillman’s adaptation allows few opportunities for Liesel, or the audience, to appreciate the scattered joys obscured by her hardship.

That is, I assume, the important role books must harbor in Liesel’s heart—the golden opportunity for escapism in a world tainted by so much suffering. Liesel takes a big risk in smuggling illegal books out of her generous neighbor’s (Nicole Wiesner) home, and the fruits of that act are owed their significance. Mike Tutaj’s projections, torn at the top and bottom, imply that what we see onstage is, itself, a literary creation, and Death occasionally underscores his narrator niche by manipulating objects or facilitating situations. But the direction and adaptation never actually delve into the unique euphoria of what it is to read a book. Any creativity that is missing from Gordon’s very straightforward staging is, I reckon, contained within the story’s close kinship with literature and the unbridled freedom and enlightenment a book can afford a child in her formative years.

Two hours and ten minutes is a darn imposing length for young-adult theater. The play initially creaks along, pausing occasionally for a lightheartedly contentious game of soccer with the charming Rudy (Clancy McCartney, naive but knowing). However, in the final forty minutes, characters’ wills are bravely pushed to their limits by the huddled ensemble of actors, and Gordon’s sparse direction and Lizzie Bracken’s skeletal home finally acquire some gobsmacking energy.

The hideous violence and ugliness of World War II are honorably acknowledged by projection designer Tutaj and fight choreographer Ryan Bourque. These creatives do not hold back or underestimate their young audience. Not a bit. Tutaj depicts a family’s gruesome despair in the aftermath of a bombing, and as Max is brutally flogged by a Nazi soldier, crawling, demeaned and bloodied, across the concrete, be prepared to wince in terror. These abhorrent images are tied together fluidly by Gordon, and the impact is visceral and unrelenting. Those final forty minutes of “The Book Thief” are most definitely what put the “S” in “SYA.” (Johnny Oleksinski)