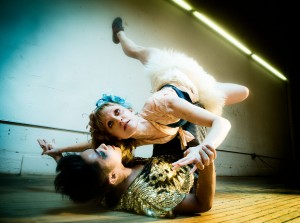 The intelligent, issue-based dance theater delivered by Carrie Hanson and her company The Seldoms this time tackles climate change—more specifically the complex relationship we have with the subject and our wide range of responses to it, from denial to panic. “Exit Disclaimer” (the title refers to the warnings that pop up on websites when you click on a third-party link) speaks to two previous works—“Monument” and “Stupormarket”—which addressed waste and consumption, and the economic recession respectively. If all these sound like complicated topics for a dance show to cover, well, they are and Hanson enjoys the challenge. She sees her current work as a nexus of creativity, education and responsible citizenship. Hanson consulted scientists, theater artists and historians researching the current project, a handful of whom will be present for a Q and A after the Friday-night performance including geologist Yarrow Axford and American Studies lecturer Michael Kramer from Northwestern University, anthropologist and theater artist Christine Dunford from UIC and Stuart Flack, executive director of the Chicago Humanities Festival. There will also be an additional Saturday family matinee, which features a free pre-show workshop where kids and parents get the chance to move with the artists. Hanson and her crew like to get the audience involved and leave them with something to talk about. (Sharon Hoyer)