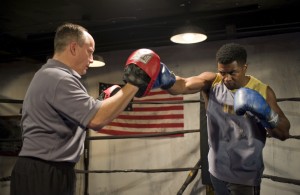 Unlike so many klutzy plays that offer a “For Dummies” guide to the basics of unartistic disciplines—math, science, football—”The Opponent,” an unapologetically aggressive world premiere which opened on Monday night at A Red Orchid Theatre, understands the hotheaded world of boxing practically; not encyclopedically. And the effect is booming and immediately relatable even to the non-athletes among us. Playwright Brett Neveu has written Tre (Guy Van Swearingen), an aging trainer, and Donell (Kamal Angelo Bolden), an up-and-coming boxer, with the passion of lifelong practitioners who have been built up and destroyed by the sport they love so. And, no matter the audience, passion is always universal.

More so than just about any other sports play or film I’ve seen, “The Opponent” uses boxing to flesh out realistic characters—instantly recognizable to anyone who has ever played a sport seriously or known someone who has—rather than as a generic plotting backdrop. Neveu does not concern himself with a cozy resolution or a heartwarming reconciliation here. Leave that popcorn to “Remember the Titans.” Donell and Tre’s feelings—at times, rippingly intense—are manifested in either vigorous boxing or vigorous discussion about boxing. That’s it.

Neveu, whose “Megacosm” also premiered last season at A Red Orchid, has written a two-act play whose dialogue and action is near wholly boxing-related, and the quick-fire jargon does not once come across as bluntly forced, unnatural or heady. It just happens to be what these people talk about. Neither Donell nor Tre have any interest in each other’s personal lives. And the play doesn’t promote the virtues of family either. When Donell returns to Tre in the second act after a five-year hiatus without any contact, the once alpha-bull’s new wife and daughter have clearly taken their toll on his formerly fearsome bite, stamina and titanic athleticism. And his demise shines a blinding light on the true nature of this relationship.

At the end of the first act—an average practice at Rock and Anvil Boxing Gym on the day of a big match—the characters’ rapport borders on familial. The coach and athlete bond over a mutual love of boxing, and besides the occasional temper flare-up, the two have a mutual respect and admiration for each other that recalls a father-son dynamic—affectionate but distant. However, when Donell reappears at the gym five years later, Tre unconvincingly pretends not to recognize him. Van Swearingen’s simple cold shoulder treatment and the silence that results is as cold and crushing as the dingy concrete walls that cage them in. After that act-one practice, Donell had lost the big match, and he and his coach dishonorably parted ways. My mind rushed to the conclusion that Tre had wanted to relive his own glory days vicariously through this trainee, but Donell let him down. The volatile ending, though, made me rethink that assumption. The shocking finale reveals a relationship overflowing with complexities and insurmountable human selfishness.

The hypnotic spectacle of the first act is the actors’ extreme physical exertion. Angelo Bolden runs in all directions, punches and jabs without hesitation, and yet is hardly, if ever, out of breath. Director Karen Kessler has smartly brought on Alfonso Ortiz as boxing consultant, and Ortiz’s true-life techniques contribute a stunning story arc all their own. It’s an upsetting and entrancing sight to witness Donell’s decline from act to act. The shift is birthed by subtleties and dexterous muscular changes, but boy is it ever sad. Working in tandem with fight choreographer John Tovar’s grizzly confrontations, Ortiz brings a televised reality to the proceedings that burns with theatrical risk. Truly, at any moment, an actor’s single misstep could send their body tumbling straight into the cowering audience.

About half an hour into the play, my nose started twitching at an odorous distraction. Perhaps a gentleman in my radius had gone a little overboard on the Drakkar Noir? No, it wasn’t a fragrance-happy patron, but Angelo Bolden’s deodorant, amplified by his accumulating sweat. The scent on and around Joey Wade’s picture-perfect boxing ring was that of a locker room, mustering up cringing, but apropos memories for me of high-school gym. The affirming sensation of being the one to catch the ball or do the most push-ups. The suffocating pressures and intoxicating highs of life and sport. (Johnny Oleksinski)