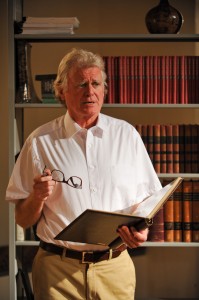 Ask anyone who their favorite teacher was, and they will always offer an insanely vivid recollection. Usually a cocky but warm blend of personality, intelligence and academic rebelliousness, there was simply no one else quite like him in the building. Actor Rob Riley’s performance in theatre4humanity’s “QED,” which opened at the Flat Iron Arts Building on Wednesday in association with Collaboraction, brims with color and pathos, bringing to life all of those unforgettable teachers in his delightful portrayal of theoretical physicist Richard Feynman.

Once a Los Alamos atomic bomb scientist and a California Institute of Technology physics professor during the time of the play, Feynman is the opposite of the meek, bookish men we absentmindedly assume dominate the scientific field. The Nobel Prize winner  (for QED or quantum electrodynamics) is also a gifted artist who adores sketching women. He is an actor of such Cal Tech productions as “Guys and Dolls,” “How to Succeed,” and on this particular evening, as the Chief of Bali Ha’i in “South Pacific.” And Dick too is a jet-setting world traveler, having visited Tannu Tuva, a country that was once an impossible trip for Westerners.

Playwright Peter Parnell hasn’t written a bio-play per se, but an idealized, fictional day in the life of Feynman. Riley speaks directly and candidly to the charmed audience as he puts together a generically titled lecture called “What We Don’t Know,” while demonstrating cool physics principles that, in their spiritual artistry, unintentionally relate back to his own life. QED, interestingly enough, is also the abbreviated form of “quod erat demonstrandum,” the Latin for “that which was to be demonstrated.” The loss of his first wife and his battle with cancer unintentionally crowd his daily activity, but he maintains blissfully high spirits by telling riveting stories of the past.

It is surely an unusual sight during intermission to see an audience walk around a set as though in a museum, observing and taking it all in, piece by piece. But Courtney O’Neill’s vision of Feynman’s office, surrounded on all sides by equation and graphic covered chalkboards and complete with a functioning Macintosh, places you inside of the brilliant physicist’s head, and everyone wants a tiny glimpse at the titanic wisdom contained within.

Although Parnell’s absorbing play, featuring seamless and unimposing direction by Maureen Payne-Hahner, occasionally crosses into well-worn one-man show territory, with segues resembling, “Oh! I didn’t see you there,” Riley’s charismatic, professorial performance, particularly in his punctuating interactions with student Miriam (Grace Wagner), enlightens this genius figure who, among other seismic accomplishments, developed nanotechnology and played a major role in investigating the Challenger disaster. But Riley’s Feynman, a teacher at heart, couldn’t be more humble. (Johnny Oleksinski)