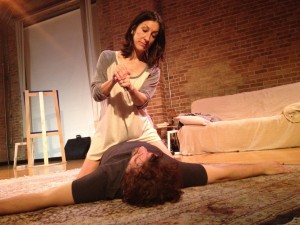 Whenever a couple’s quarrel unexpectedly crashes its way onto my television screen, I fast-forward. Perhaps I do it because watching lovers fight is awkward. Or perhaps I do it because the heartbreak is a reflection of my own life. Maybe it’s awkward because it’s a reflection of my own life. I don’t know. But, whatever the reason, I usually skip on through. The scene is only a minute long, after all, and its effects will become apparent later. But, try though I might, there is still no “next” button at the theater.

During “Something Blue,” a world premiere by Artemisia, I was craving that glorious button with an addict’s one-track mindset. For Julie Proudfoot’s play is a ninety-minute force-feeding of grating couple fights. And, as in life, those tedious arguments onstage amount to absolutely nothing of dramatic consequence—only a whole lot of vain pettiness from all involved parties.

The title, unsubtly excised from the nostalgic wedding-day bridal superstition, “something old, something new, something borrowed, something blue,” tells you everything you need to know about the play before the first word is uttered: Marriage isn’t all it’s cracked up to be, and neither are men. Where have I heard that before? But those timeless, quarrelsome messages of pessimism are better served to a work that is, at least, somewhat relatable and accessible. A work with a semblance of resonance. “Something Blue” is little more than derivative, pretentious drudgery, basking in the glow of its own egotism.

A marriage—or any relationship for that matter—cannot function when the participants are equally self-absorbed and proud as Mia (Julie Proudfoot), a dully rendered artist, and her hapless writer husband Parker (David Blixt), made sad by Proudfoot but hardly impassioned. Look at George and Martha from “Who’s Afraid of Virginia Woolf?” That screwed-up marriage is, without a doubt, not operating in a socially acceptable or psychologically healthy way. But therein lies the joy and madness of Albee’s play—sorting out the jumbled puzzle. The playwright has even gone so far as to divide “Virginia Woolf” into games to toy with and sicken his audience.

But there is no joy to be found in the glacial deterioration of Parker and Mia in “Something Blue.” Only madness. And that madness doesn’t come from deciphering hidden psychology or a roller coaster of witticisms, but out of the onlookers’ desperate pleas for the couple’s speedy breakup. From the first of the evening’s ten scenes, the inevitability of their separation is mind-numbingly obvious to anyone with sense. The infidelities, past indiscretions, degrading Sacher-Masoch-esque declarations—”I am yours. I am nothing without you”—or fresh emotional wounds—like Mia’s decapitated new self-portrait titled “Something Blue”—that are unemphatically introduced are all subsidiary to the “duh” culmination the audience impatiently awaits as the clock slowly ticks down.

Doing double-duty as playwright and actress, Proudfoot has provided a mountain of unnecessary impediments for herself and Blixt that prove insurmountable. Her characters are rigidly stunted by stereotypical artiste affectations, lacking only the black turtlenecks and berets to complete the caricature. The couple acts the hifalutin intelligentsia as they spout off words like “placate” and “anathema” during emotionally charged fights about cheating, in which the sculpted language of an academic paper has no logical or believable place.

Proudfoot has also left the duration of the relationship—displayed simply but without enough momentary emphasis by director Azar Kazemi—without any temporal distinction. The amount of time that passes between each scene is unspecified, so the burden of their struggle is soft and flimsy. Neither character—but especially Blixt’s jerk of a Parker—has a single redeeming quality, and from the earliest moments, there is no relationship worth rooting for. Just break up already. (Johnny Oleksinski)

At The Drucker Center, 1535 North Dayton, brownpapertickets.com/event/261002. Through November 4.