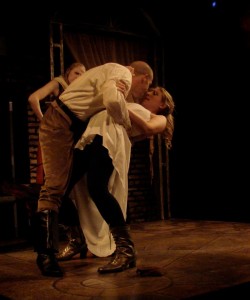 Restoration Comedy is a gleeful, frivolous genre blending a unique crude low-country attitude with the lightness of step and speech that would later come to define Comedy of Manners. And it’s an often overlooked portion of the English theatrical repertoire. Playgoers always enjoy their Shakespeare, occasionally lap up their Marlowe, but rarely ever take in any Wycherley. That’s such an unfortunate trend because the humor in plays like “The Beaux Stratagem” and “The Country Wife” still tickle the funny bone and the plots engage the mind.

But why has 20% Theatre Company, in their first classical outing, chosen a play as challenging to navigate as Aphra Behn’s far less embraceable “The Rover”? Likely because the company “dedicated to strengthening the presence and raising public awareness of women artists in theater” wanted to perform the most popular play by arguably the first professional woman playwright. Understandably so.

But what defines “The Rover”—unlike Restoration Comedy’s usual sexual banter, filled with double entendre, often bordering on vulgar—is the way in which women are compromised by the play’s unconscientious band of brutish men. Coming from a woman playwright, the unusual depiction of courtesans, love triangles and violence is of strong interest, but the staging must be clear and fearless in order to convey Behn’s feminine voice. There are two attempted rapes in “The Rover,” the gruesome disturbance of which, for a contemporary audience, darkens the tone without much opportunity for amelioration. Jovial endings with comic marriages be damned. But without those terrible acts, the play—not all that funny in the grand scheme of restoration plays—sheds its personality, becoming a kind of dull “Much Ado About Nothing.” Director Jessie Mutz’ production, which opened on Saturday night at Rivendell Theatre, reduces those crucial scenes to fleeting make-outs, robbing an already spastic staging of an opportunity for a change in trajectory.

That safe choice is not the only issue at hand, either. The language is bluntly delivered by all but Florinda (Meg Harkins), a young Italian lover at the center of the play’s conflict, and most actors overwhelm the dialogue with pushed physiques and  abounding indication. A necessary differentiation that must be made—not necessarily in dialect, but in behavior—is between the Englishmen and the ladies of Italy. Belvile (Michael Medford), the lover of Florinda, Willmore (Peter Eli Johnson), Frederick (Nick Stockwell) and Blunt’s (Ross Patrick Frawley) visit to Naples for the revelry of Carnival is not unlike a modern European mini-break—a tourist’s liquored-up rampage colored with cultural disregard for a weekend of fun, partying and masquerade.

Behn’s clash is not only a battle of the sexes, but a war of cultures as well, and the men’s purpose for being in Naples is difficult to discern in this cluttered production. kClare Kemock’s surprisingly layered and ornate costumes for a production of this scale attempt to clarify who these characters are, but the actors and staging do not effectively work alongside them. Much humor is also born out of violence designer Zack Meyer’s brisk and shimmering sword fights, filling the small space with swashbuckling danger. It is the light, pinging tap of one single sword against another that the burdened dialogue could use a splash of. (Johnny Oleksinski)