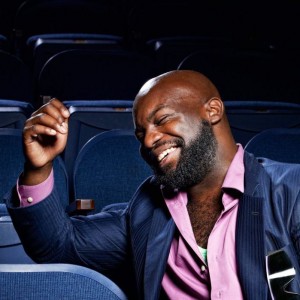 Ike Holter is the Monarch of social butterflies. We met up on a Monday night at Beauty Bar, a sugary confection of a pub, where the playwright was to perform onstage in Salonathon, an upbeat weekly gathering of young theater artists—a little bit party, a little bit poet’s corner. Ike was there to tell the crowd a story about the worst play he ever wrote for The Inconvenience, the company with which he is resident playwright.

Leave it to Holter—whose new play “Loom” with Nothing Without A Company opens on November 2—to transmute failure and embarrassment into funky late-night uproar. But that’s just what this perpetually positive and delightfully sassy dude does so well. Actually, the last time I saw Ike was on the other side of midnight during Mary-Arrchie’s weekend-long Abbie Fest. He was lounging, zestfully decked out in short shorts and roller blades, in an empty bathtub. He left the blades at home the evening of our interview, but his inclusive, comfortably eccentric attitude was, as usual, cranked up to eleven.

Every few minutes of our chat, a friend or extroverted admirer would appear out of nowhere with an enthusiastic “Hi!” and some cool relaxed pleasantries. And when asked how he was doing, without missing a beat, Ike would say, “Chillin’ and killin’.” I loved this. In part because Holter’s fantastically swift phraseology pervades so many of his plays—Theater critic Hilton Als of The New Yorker said, Holter’s writing can sound like “Gwendolyn Brooks’s ‘In the Mecca,’ by way of Essex Hemphill’s joyous blasphemies.”—and also because “chillin’ and killin'” so perfectly encapsulates the essence of Ike.

I saw two of his plays in 2012: the smoldering “Hit The Wall” at Steppenwolf Garage and “Vigilante,” a seven-minute work in Collaboraction’s Sketchbook Reincarnate. But those were only the tip of the Ikesburg. “This summer I worked on ten short plays that were produced from May to August. And then I had two full plays that were workshopped. And now I have two more plays in development.” A stalwart when it comes to saying “No,” this hot playwright never seems to stop. Not unlike his Stonewall dance-party poem, “Hit The Wall.”

There’s been much speculation, public and private, over the future of the sleeper hit of the 2012 Steppenwolf Garage Repertory, attended by celebrities Rosie O’Donnell, Dan Savage and Mayor Rahm Emanuel. The Chicago Tribune’s theater critic Chris Jones wrote in April about boiling interest in the play from producers at Off Broadway’s Barrow Street Theatre, the former home of David Cromer’s “Our Town.” When I poked and prodded Holter for information on upcoming plans for the show—among this interviewer’s favorite theater experiences of 2012—he offered this deliciously cryptic message: “Obviously talks have happened. And regardless whether a decision has been made, these things take time.”

Well, time sure does fly. Only four days later, Playbill.com announced that “Hit The Wall” plans to play Barrow Street Theatre in February 2013. But for those of us too antsy to wait and too cheap to fly, the world premiere of “Loom” by Nothing Without A Company promises Holter’s lovably ragtag personality combined with the blood-curdling thrills of theatrical immersion. As Ike described his newest play—a site-specific mystery with hints of science-fiction—I couldn’t help but ponder its connection to earthbound sci-fi episodics like “Lost” and “Twin Peaks.” And given Holter’s expressed philosophy—”My number one and maybe only rule as a writer is to write something that I would pay to see”—that pop-cultural bridge fits snugly into his distinct aesthetic.

“If my broke ass—and I am broke—will pay to see a show, then that’s like the equivalent of me going to see a movie. So, I wanna make a show that people are like ‘Oh! That concept, that cast and that story sound really interesting!’ instead of ‘Oh. Theater’s weird. I only go to see my friends in shows.’” “Loom” certainly satisfies the rubric of the former. Directed by Brea Hayes, the concept, cast and story titillate the imagination and inspire rich intrigue.

“[‘Loom’ is] about this group of friends who, ten years ago, had one of their friends disappear. Ten years later they all come back to the place where it happened to have this kind of “Big Chill” reunion.” Sequestered in a Minneapolis suburb, the play also contains shades of a whodunit. “There were holes in the case. You’re not sure who exactly did it or where this girl went,” says Holter. But, at this anniversary gathering, one friend reveals some previously unknown knowledge regarding the missing girl. And that sly twist is only one of many unnerving factors at work. Like the play’s location.

“We don’t tell the audience where it is. They meet at this bowling alley called Timber Lanes right off the Irving Park stop [1851 West Irving]. And then maybe it’s a five-minute walk down this long alley that gets creepier and creepier. And then, when you get to your final location, this garage door’s opening, music’s coming from inside, and the play’s already in progress.” In the immediate wake of Halloween, “Loom” looks to have the popular appeal of a dreary, claustrophobic, adult haunted house. “[You’re] going down this rabbit hole that’s actually very, very scary.” As the blunt and humbly creative Holter reassures, “That’s the kind of shit I like to do.”

“Loom” begins at the Foxhole, 1428 West Lake, on November 2, and plays through December 1. For tickets, visit nwac.ticketbud.com/loom-by-ike-holter.