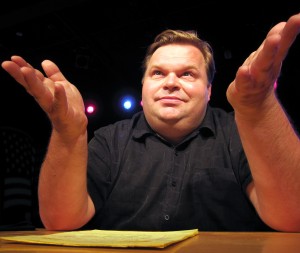 Occasionally I am reminded that closely (or loosely) held beliefs are essential to criticizing a work of art. Sure, that “Ah-ha!” lightbulb might come across as generic and obvious to many, but, as the monologist Mike Daisey says, we so often ignore “what’s right in front of us.” If I falsely adorn the guise of tabula rasa—a boldfaced lie—how can my extant opinions be shaken up by a play, film, sculpture, dance, a piece of music or a book? The same goes for any arts patron.

And isn’t that the whole point? To question? To doubt? To learn? Our rigid, score-based educational system and consumerist mindset have imparted an appetite for plain old structure—assigning quantitative points (otherwise known as stars) to qualitative intangibles. No Audience Member Left Behind. But all too frequently a person’s bias cannot be suppressed. And—as I wondered to myself amidst a sizable outdoor gathering under the neon “MOTHERS” sign at the Museum of Contemporary Art listening to Daisey—maybe it never should have been in the first place.

The renowned and sometimes-controversial monologist, in his “American Utopias” at MCA’s Edlis Neeson Theater as part of the Chicago Humanities Festival, speaks about socially imposed inhibitions from behind his trademark sturdy wooden table—a kind of spoken-word op-ed column or perhaps a friendly, hilarious, slightly drunk bonfire with friends. Regaling his enrapt audience with three separate-but-equal life occurrences, Daisey suggests that these constructs we so mercilessly fret over are of our own invention. The fast lane at Disney World, the blurry rules of Occupy Wall Street’s Zuccotti Park and even the weeklong Burning Man—a drug-filled, arid event that lauds uncontrolled spontaneity—all exemplify humanity’s acquired craving for unforgettable experiences within neatly established boundaries. “Your memories begin now!”

Daisey begins at the free-wheeling Burning Man, a yearly pop-up community in Nevada’s Black Rock Desert, that the monologist, “a strange misanthropic creature from Maine,” never expected to attend with his wife Jean-Michele Gregory (also the play’s director). “Art cars” whiz by, the Orgy Dome looms, and at the end of the sandy jaunt a life-size wooden effigy is tribally burned. Early in the week, a full-body hug from a naked fellow male participant makes Daisey feel awkward and uncomfortable—a violation of his space bubble. But he giddily tells us that hugs from women are just fine. The hypocrisy of it all! Daisey says “We’re all hypocrites.” From a seated performer in a black shirt to a crowd of middle-aged Occupy Wall Street sympathizers protesting in Brooklyn at a watered-down event called “Occupy This,” everyone’s a hypocrite.

The performer did not attend the actual Occupy Wall Street protests. Like they so often do—or like we say they do, anyway—life’s commitments delayed the New Yorker’s trip to Zuccotti Park until the protests were forcibly dispersed by Mayor Bloomberg. But Daisey’s interviews with participants and his revulsion at leaked police footage drew him to the plight of these marginalized, peaceful people—a group loathed by many in this country who outright refused to understand their goal, which was—another lightbulb—to occupy Wall Street.

Daisey blends these stories—shocking to a largely affluent audience expecting spoon-fed insight—with the more relatable horrors of a trip to Disney World. The anecdotes and recollections of his adult family’s excursion are tremendously funny, but it’s the strip-teased juxtaposition of Disney World to Burning Man that uncovers surprising, unifying parallels. Daisey’s description of the torches lit around the lake at Epcot (Experimental Prototype Community of Tomorrow)—the humanely complicated Walt Disney’s own idealized village—and the burning effigy in Nevada connects groups that, because of meaningless social constructs, were previously and unjustly separated.

As Daisey tells his tales, his voice navigates a descending spectrum of princess highs to film noir lows. Think Martin Short’s Jiminy Glick, but bludgeoned with sagely substance. Daisey dwells on each syllable with the maternal caress of doctor, composing musical phrases from colloquial, often humorous speech. But the attentive treatment to his music does not amount to a soothing lullaby. It’s more akin to the unpredictable surges and swells in opera, a form predominantly unconcerned with zippy melody, but obsessed with pregnant drama and potent humanity.

As a writer, his speech—largely extemporaneous—is vivid and present. Daisey shows up. He doesn’t encourage you to abandon popular culture, strip to the buff and make a home in a sand dune. Or get dreadlocks and pick up a picket sign. Not at all. The performer engagingly and generously presents his realities, and wordlessly permits us to take from them what we will. It’s that structureless freedom that enables the audience to take away so much renewed sense of being—a blissful sensation infrequent in American theater.

My biggest block walking into Daisey’s monologue was a blasé admonition of Occupy Wall Street. It is not as though I had a fervent opposition to corporate regulation or anything like that. My irritation stemmed from a misunderstanding of their purpose. As Daisey spoke to us inside, and later outside, he erased the divide between two-hundred-eighty people innocently sitting in a hall and the exact same number now subversively standing on a street corner. That moment of clarity filled me with resounding respect for the protestors. After all, I occupy theaters nearly every night of the week praying for the same, perhaps unattainable, revolution as those in Zuccotti Park. I think we all do, in one utopia or another. (Johnny Oleksinski)