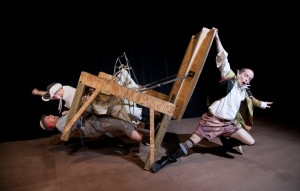 “This is not the story of Frankenstein!” dejectedly screams the Storyteller of 500 Clown’s “500 Clown Frankenstein,” which opened in an exhilarating, fresh-faced seasonal remount on Wednesday night at the Viaduct Theater. From outward appearances—physical gags, scrappy costuming and an atomic bomb’s worth of forward emotionality—I can’t blame Lilly the clown for feeling a smidgen frustrated with her unwinnable circumstances. But Leah Urzendowski’s character, a rambunctious and unabashedly narcissistic showoff, is both right and wrong in her bemoaned assertion.

To be sure, there is substantially more plotting minutiae to author Mary Shelley’s race-to-the-finish effort in literary romanticism than in this race-to-the-finish attempted retelling of it. Boasting a treasure trove of dark and dreary back story, a strange encounter with a forested family and a jaundiced-looking creature’s well-spoken sentimental journey to the North Pole, the novel certainly ventures far beyond the confines of its iconic stormy castle. The book, since its inception having been viciously mined for simple horror fodder, actually carries a cumbersome weight of event-laden baggage. But, much to their dismay—and, on opening night, especially Dean Evans’ irritation—the ingeniously silly and miscommunicating clowns can barely escape easy-peasy Chapter One.

The story, whose romantic sloshing betrays an idiosyncratic absurdity today, is rife for the comedic blunders of clowning. So, though the jovial triptych of clowns cannot get their act together to reenact the word-perfect story of “Frankenstein,” the essential spirit of the tale is very much “Alive!” in their fun-filled competitive rivalries. The poignancy the three actors of the ever-hyperbolic “500 Clown Frankenstein” bring to their dastardly wooden table is derived from Shelley’s all-important thematic threads of victimization and the power of speech. In the novel, the monster’s acquired speech was the key to his freedom. For 500 Clown, he/she that holds the book is immediately all-knowing and powerful, and the unusual struggle undertaken to grasp it, dizzying. Their largely improvisational journey is clear, slapsticky and sometimes frightening. And the sublime thing about victimization in clowning is that the ensuing antics, often physical in nature and replete with Schadenfreude, are so maniacally hysterical to witness.

Though only three persons exist onstage in the production—the Storyteller, the Helper and the Scientist—five idiosyncratic, cunningly obscure performers alternate the roles in a smattering of gender-unconcerned combinations, resulting in a different clowning farce each night. The five actors’—Urzendowski, Jay Torrence, Pam Chermansky, Dean Evans and director Adrian Danzig—personalized clowns reshape and redefine characteristic attributes of whatever role they take on each performance. The play feels rehearsed, but clobbered together. Safe, but perilously out of control. Hilarious but tortured.

While an hour of the performance is zany and belly-smackin’ funny, the tone veers sharply in its final few minutes. A pile of dead matter finally becomes reanimated into the deceptively fearsome monster, and one of the lovable clowns unwillingly must assume the ostracized role. That night, Torrence (playing The Helper) became the creature, and his response was the devastating cry of a child forced to play the Robber in an uneven kiddie game of Cops and Robbers. Aroused by a sudden state of dementia, Torrence makes a horribly fatal error, and the repercussion is a house frozen in silence. That moment is the crowning achievement of as true an adaptation of “Frankenstein” as I’ve ever seen. (Johnny Oleksinski)