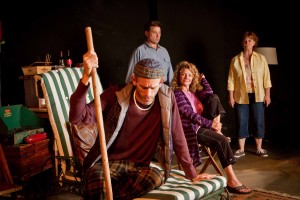 Little boxes made of ticky tacky, meet mid-sized yurt made of treated wool. In Jane Anderson’s relatively new play, “The Quality of Life,” receiving an intensely moving and resonant Chicago premiere by The Den Theatre, two particularly belligerent worlds collide: the believing and the non-believing.

On one end is Bill and Dinah, Ohio suburbanites who tragically lost their teenaged daughter to the evil whims of a serial killer. And on the other, Neil and Jeannette, free spirits whose California home was sadly devoured by a wildfire, forcing the pot-smoking, wine-drinking couple to make camp in a yurt: a kind of comfortable Mongolian tent. Suffice it to say, a successful party would never include both these couples at the same table. But for over two hours, Anderson throws them together around a fire pit to hammer out some razor-sharp differences.

As is often the case, those differences are exaggerated by family ties. The matronly Dinah (Jennifer Taylor) and wiry blonde Jeannette (Liz Zweifler) are cousins and, no matter how estranged and awkwardly incompatible they may be, common strands of genetic code always enable heightened scrutiny and well-meant bitchiness from relatives. No exception. Bill (Stephen Spencer) and Dinah’s trip was born of kindly intentions. As recommitted Christians, they (well, mostly Dinah) felt compelled to reconcile with their supposed-to-be-loved ones, especially Berkeley professor Neil (Ron Wells) who has inoperable cancer. Jeannette and Neil welcome the Ohioans into camp, and the conversation is, as expected, cordially contentious. But as the weekend goes on, and the characters welcome each other further into their lives, the interaction spirals out of control as specific details regarding Neil’s impending death come to light.

Anderson has, with unrepentant legibility, written a play of many many issues, from organized religion versus beige spirituality to an individual’s right (or lack thereof) to euthanasia. But she thankfully has not written a play about those issues. A morbidly funny work; light fare, it ain’t. But her characters, so staunch in their convictions regardless of their conservatism or liberalism, are not mere vessels for ideas, but layered and complicated beings with the gentle capacity to change. Though adhering to an old-school playwriting rule and always placing exact opposites onstage with one another, Anderson doesn’t childishly play favorites. For a moment, she will skillfully lead you to believe she has sided squarely with hippie holdovers Jeannette and Neil, but then her allegiances switch over as rapidly as her characters’ do.

A play with a flurry of high-stakes shifts as this one is a scrumptious opportunity for actors, and director Lia Mortensen, whose staging realistically inhabits this burnt-up world without a hint of unnatural presentation, has assembled an ideal cast of actors who undertake their nuances with spectacular focus and generous openness. Spatial awareness is so often an oversight in production, but these actors adapt their energy easily into their condensed space, powerfully understanding that their truthful whispers can be heard loud and clear. And that they can actually talk to each other, not at each other.

That subtle differentiation lends remarkable sensitivity to Neil’s exhausting war with cancer, given a bleeding-heart sympathetic performance by Wells, and his multifaceted new relationship with Dinah (Taylor spends the entire play defying audience expectation). Spencer’s is the one uneven portrayal, coming treacherously close to caricature, but his stringent, rarely moved Bill does help maintain a driving conflict that lifts the play over its occasional lulls. Like Henry Bethel’s set, ashen with optimistic sprouts of newborn nature, this gifted ensemble injects soul and love into “The Quality of Life,” recreating what is a good play on paper into profoundly sincere theater. (Johnny Oleksinski)

At The Den Theatre, 1333 North Milwaukee, brownpapertickets.com. Through December 1.