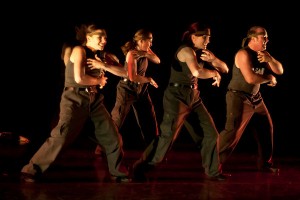 The entire body, internally and externally, is a percussive orchestra in Billy Siegenfeld’s theatrical Jump Rhythm technique: a stomping, tapping, hollering, singing, slapping, grunting force of life in all its joyfulness, libido and aggression. The id rages strong in the two premieres by Siegenfeld—playfully in “The Sumptuous Screech of Simplicity,” a vocal remix of the chorus of the Isley Brothers’ “It’s Your Thing,” broken down, repeated, spoken, sung with an accent, shouted and generally toyed with, not unlike the way we sing to ourselves when no one else is home. “There Never Was a War That Was Not Inward” (title from a Marianne Moore poem; the literary muse is strong for Siegenfeld.) lays out the dark, combative side of our animal selves, the frustration and rage that fuels violence. Guest choreographers Jeff Hancock and Kevin Durnbaugh also have premieres on the program. (Sharon Hoyer)