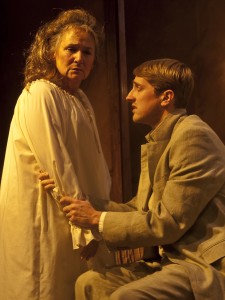 Chicago is having a renewed love affair with the work of Eugene O’Neill lately, as several local companies have featured O’Neill’s plays in recent seasons. Eclipse Theatre Company, whose mission is to produce one playwright per season, finishes out their year with an ambitious mounting of “Long Day’s Journey Into Night.” Arguably O’Neill’s best play, “Long Day’s Journey” is an autobiographical account of the playwright’s upbringing. At the time it was written, O’Neill was quite ill and asked that the play not be produced until after his death in 1953. The play went into production in 1956 and subsequently won many awards including the Pulitzer.

Never has there been a play that draws so heavily on the theme of family dysfunction. “Long Day’s Journey” dissects a successful Irish-American family in the early twentieth century over one summer’s day. The patriarch, James Tyrone, is a washed-up Broadway star whose main focus in life is not ending up in the proverbial “poor-house,” even while one son suffers from T.B. and the other is a philanderer. The Tyrones hold a deep secret that starts to present itself from the beginning: their mother is addicted to morphine. As the Tyrones drink the day away, they pick at one another until the disturbing climax. Ever-modern themes of the flawed healthcare system and the subjugation of women also creep into this classic play.

Eclipse’s production misses the mark of this pivotal play all too often. Luckily, O’Neill’s script holds its own as a heartbreaking work of art. This is a play that relies heavily on the intensity and interpretation of its lines. The male cast doesn’t seem to have a sense of the speaking pattern of this time period, and it’s unfortunately all too apparent in flat monologues and lukewarm exchanges. Patrick Blashill as James Tyrone looks far too young to be the father of a thirty-four-year-old son and hardly distinguishes himself as a father figure. Joe McCauley is hopelessly miscast in the role of James Tyrone Jr. McCauley seems to be in a race to recite his lines and gives up any attempt at sincerity early in the first act. The tragic character of Edmund Tyrone is played tirelessly by Stephen Dale who, while not nailing it, is at least trying.

If not for Susan Monts-Bologna’s fascinating performance as the severely unhappy Mary Tyrone, this production would be lost. Monts-Bologna makes very interesting choices for her Mary Tyrone, turning her from victim into antagonist. Mary’s passive-aggressive duplicity is immediately captured in a subtle gesture as the play opens. The scenes featuring Mary are electrifying and truly heartrending, allowing the audience to be moved during the last scene in which she finally unravels.

Eclipse’s production looks great in the intimate studio space at the Athenaeum Theatre, with some eerie lighting effects created by old footlights. The nearly four-hour play is punctuated by two ten-minute intermissions and Eclipse does well in being strict about time limitations since this is such a lengthy work. What this production has in common (if anything) with the Goodman’s spring revival of “Iceman Cometh” is that maybe these plays would benefit from directors cutting certain passages of text for the sake of time. For those who have never seen this work, Eclipse’s is probably not the best production to start with, but fans of the play will really appreciate Susan Monts-Bologna’s riveting performance. (John J. Accrocco)