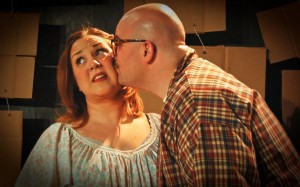 Amnesia victim Claire (Kathryn Bartholomew) wakes each morning to a new reality; she can’t remember her old one. Husband Richard (Giuseppe A. Ribaudo) and son Kenny (Kevin Lambert)  put their battles aside to care for her until brother Zach (Andrew Marchetti) kidnaps her and takes her to her mother Gertie’s (Daria T. Harper) house, where she meets Zach’s henchman Millet (David Cady) and girlfriend, Heidi (Stevie Chaddock Lambert). Nothing is as it seems as the narrative reveals new realities, layer by layer.