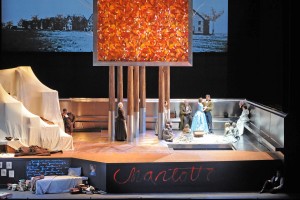 Werther who? Don’t be ashamed if that is what you’re thinking. Jules Massenet’s 1892 French opera based on Johann Wolfgang von Goethe’s “Die Leiden des jungen Werthers” (“The Sorrows of Young Werther”) certainly falls within the standard opera repertory here in America, but a plurality of opera-goers don’t know it from Adam—or “Le Cid.” Before last Tuesday, you could have counted me among them. However, that Massenet and “Werther” are unfortunately so often omitted from seasons is no one’s fault.

Patrons don’t demand it because they simply don’t know to demand it. But in 2012, Chicagoans have a unique opportunity to become acquainted with this little known, remarkably engrossing work that bridges the volatility of Goethe’s Sturm und Drang with the glorious, post-Romantic French sweep of Massenet. In a co-production with San Francisco Opera, Chicago’s Lyric Opera is presenting its first “Werther” since 1978.

Why the long wait? During a recent dress rehearsal, I was struck by the entrancingly melodic score and psychologically probing libretto, not to mention the visual surprise and unexpected logic of its set of aluminum, neon and mixed media. Afterward, I sat down with director Francisco Negrin, back at Lyric after last season’s “Rinaldo,” to discuss his new-to-Chicago production and to break down the barriers between American audiences, Massenet and “Werther.”

A prolific composer, in the United States, Massenet’s most popular composition is his “Manon.” “But,” says Negrin, “‘Werther’ is better known [than ‘Manon’] in Europe.” An ocean of separation and a reversal of opinion. The director, pleased to be back at Lyric, which he calls “the most European of American opera houses,” describes both Werther the person and “Werther” the opera as “different.”

“In Europe, being called ‘different’ is a compliment,” says Negrin, whose charm, accessible intellect and chilled enthusiasm would also grant him that unique, celebrated classification. But, he noted that “in the United States, [‘different’ is] sort of like saying ‘interesting’ instead of ‘good’.” Werther’s manic obsession with the engaged and later married Charlotte despite her clear unattainability presents a turnoff for some.

But that undeserved revulsion—”Werther” is actually quite relatable to anyone who’s ever been in unrequited love—is born of a contemporary worldview. Goethe’s novel was controversial in its time as well, but in a passionate, fearsome sense. Werther’s dark poeticism and obsessive love is what the director calls “romanticism before romanticism,” with characters driven by immobile fate and omnipresent nature in tandem with a subdued psychological realism.

When asked about how “Werther” and Massenet coalesce within Negrin’s directing style, he retorts with a sheepish, I-know-this-is-not-what-you-want-to-hear kind of grin, and says, “I don’t have a style.” The director prides himself on his ability to present material in the manner that the material suggests, whether Rodgers and Hammerstein or Handel. But don’t confuse that with popular perception of opera, which Negrin berates as “Puccini-style” or, more humorously, “Spielberg-style.” Puccini and his filmmaking reincarnation, Steven Spielberg, tend to treat emotion and exhilaration as manipulative tear-jerkers rather than as a natural extension of circumstance and action.

But “[Massenet is] a thinking man’s composer.” Though he is as tuneful as Puccini (you will leave humming Werther’s repeated theme, both triumphant and brooding, heard so often in Acts III and IV), Massenet’s music delineates dramatic moments with dedicated clarity and precision. As does Negrin’s staging, deftly isolating Werther (a feast for a lyric tenor) and Charlotte’s fantasies from their dangerous reality. Negrin believes his directorial duty is to enable the audience to observe characters’ decisions implied by the score and libretto. However, that does not mean an aesthetic bound to often-untrue, period-perfect costumes and sets. Louis Désiré’s (designer of last season’s “Rinaldo”) expressionist design is divided into three distinct tiers, employs video and panoramic imagery and its central focal point is a small metallic-wooden forest. It’s gonna freak some people out.

This production stirred up controversy among purists in San Francisco because of a non-traditional piece of Negrin’s staging. As Charlotte reads aloud Werther’s love letters, Negrin has her direct them to Albert, her fiancé. Though critics cried foul, the director insists that their opinion comes from, not an adherence to the score and libretto in the original French, but to antiquated translations and simplistic synopses. The director says his decision is closer to Massenet’s intentions and allows the audience to experience the exact moment that Charlotte, an initially frail but suddenly powerful mezzo-soprano, falls in love with Werther.

Why so much critical anger? Negrin perceives an opera culture that listens to the many available recordings of scores over and over again rather than willingly experiencing them anew, therefore getting stuck in an unbreakably rigid way of thinking. So, on the drive down to Lyric this November, Francisco Negrin might prefer you blare the Top 40 instead of Pavarotti’s “Pourquoi me Reveiller?”