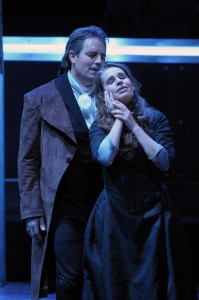 How rarely is Massenet’s “Werther,” the work many consider the crown jewel of French Romantic opera, done at Lyric Opera? Well, only twice prior in the company’s near sixty years of existence, the last time in the late 1970s, so definitely not a good idea to miss it this time around, unless your calendar for 2045 is wide open.

Huge pity that the staging of this new production sets aside the original’s intentions and instead overlays a matrix of extramusical pseudo-psychological associations not only at odds with the narrative and the music—no small feat—but more often than not, directly competing against both, to say nothing of common sense, for attention.

Also not helping is a cluttered, inelegant and cold set design that also stands in direct contrast to the lusciousness of the music. Under such less-than-ideal presentation circumstances, one wonders why Lyric did not just save some money and decide to present “Werther” in concert form.

That leaves us with the music, which thankfully is in superb hands here.

Despite a slow warm-up Sunday afternoon, Wilmette native and Ryan Center alumnus Matthew Polenzani in his first-ever traversal of the title role is a marvel of vocal clarity and tonal beauty. He even manages to somehow steadfastly inhabit the role dramatically despite the surrounding stage gimmicks doing their best to take our attention away from him.

Making her American debut as Charlotte, French mezzo-soprano Sophie Koch has a gorgeous timbre even if dynamically some of her moments are oversung and underpitch.

What is more important than how either sang individually is that Polenzani and Koch have vocal and dramatic chemistry where we really do believe that they are in love and their duets are sung are as if they really mean them. That is a rarity in the opera house, yet to have the couple’s unrequited love trashily satiated here as if they go off to a Motel 6 amazingly manages to miss the entire point of the opera to say nothing of the original Goethe novel, both homage to unreciprocated Romanticism.

Sir Andrew Davis has been called upon to conduct a wide variety of styles in his capacity as Lyric’s music director sometimes with varying results, but he is in his element here conducting this sumptuous score. The color, nuance and poetry of the orchestral playing is first-rate. (Dennis Polkow)