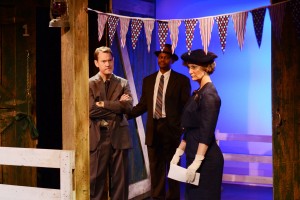 The past few months have been mighty eventful for Theatre Seven of Chicago, to say the least. The six-year-old storefront company became this year’s recipient of Broadway in Chicago’s Emerging Theatre Award in April, and it was announced that they will present Christina Anderson’s “Blacktop Sky” as part of Steppenwolf’s Fourth Annual Garage Repertory in the Spring of 2013. Exciting achievements, to be sure, but regardless of the relative media glitz, this eager-yet-mature company’s steady goal remains, as artistic director Brian Golden told me, in “not just cranking out a hit, but in really trying to lift up our community.”

Beginning on November 16, Theatre Seven continues that valiant effort with the professional world premiere of Carter W. Lewis’ “American Storm,” a “big stinkin’ play” of politics, corporate business and a dwindling American pastime, at the Greenhouse Theater. The work is a challenge for any theater, let alone an itinerant storefront. It requires twelve actors over a broad spectrum of ages, uses constantly shifting locales and revolves around the wide-open sport of horse racing. But Golden felt compelled to put on the play since seeing it as a student at Washington University.

“I was a sophomore in college when my theater department did it. And it’s really stuck with me since then,” says Golden, sitting across from me with associate artistic director Cassy Sanders at the Lincoln Park Whole Foods cafe, an odd yet somehow appropriate venue for our interview. As the play’s director, he also acknowledges its inherent difficulties.”The audience needs to experience a horse race. Non-Equity can’t get horses either, so we gotta do that with sound and movement stuff.” That sentiment made this interviewer giggle. “It’s definitely a really theatrical challenge, but what would be the fun in doing something where you say, ‘Oh. This is easy. We could do this in our sleep?'”

Theatre Seven doesn’t do much of anything that would qualify as easy. Whether it’s their monthly reading series, “Shikaakwa” (this season featuring directors Kimberly Senior, Matt Hawkins and Halena Kays), their new Sevenclub subscriber program offering four plays and four drinks for only $65, or their upcoming summer project called “Unwilling And Hostile Instruments,” which “is gonna be seven short plays about great Chicago women from the last hundred years honoring one hundred years of women voting,” Theatre Seven loves doing things the hard way.

“We always try to ask the question with all of our work, ‘Why would we do this play right now? Why would we do this play in this season?'” says Golden, a handsomely eloquent and determined fellow. “’American Storm’ felt shockingly current, opening a week after the election.” That relevance is unsurprising, but also unintentional. Playwright Lewis, who wrote the play a decade ago, told me on the phone from St. Louis that his writing had taken a turn toward the political and, as a longtime lover of horse racing, his two passions collided with “American Storm.”

Lewis’ play is set against the backdrop of both the Cuban Missile Crisis and the Kennedy Assassination: scares and horrors that rip to shreds the notion of nostalgia for a better day. A truly multi-generational cast has enabled a vibrant conversation about “those seminal moments that can unite in tragedy” that “American Storm” necessitates. “For Mark Shallow, who’s playing Doc, to talk about how he’s the only one in the room who actively remembers the Kennedy assassination, and then to go all the way down to Johnny Meyer who is twelve or thirteen. And, while having this conversation, for us to stop and realize, ‘You don’t remember 9/11 do you?’ And he says, ‘No, I was two years old.'” The cast and creative team have taught each other in rehearsal as much as they’ll teach the audience in performance.

Next up after “American Storm” is “Blacktop Sky” at Steppenwolf Garage Rep, which has been a tremendous learning experience for the company. “When you graduate from an acting program,” says Sanders, “and you start running a theater company, no one hands you a pamphlet that says ‘Here’s how it works!’ This has sort of been a pamphlet that we’re getting. ‘Try this! Try that!’ That’s huge. You don’t get opportunities like this very often.” Golden chimes in to say, “’Blacktop Sky’ is not only a gorgeous play, but has remarkable relevance to Chicago. Particularly being done at Steppenwolf, a half a mile from Cabrini Green.” The play concerns the struggles of those in housing projects through three vibrant individuals, and begs the question “how do you participate in your own community to stand up for what’s right?” “There have been people who have been curious or confused as to what this story has to do with Chicago. And that’s why we’re doing it.”

But first is “American Storm.” “One of the characters in the last pages of the play asks this question, “Do you think anything good will ever happen in this country again?” And that’s been the moment of the play that’s kept speaking to me in terms of why we want to tell this story right now,” says Golden, “that question of things have been hard, things have been challenging. Tonight, actually we’re kind of casting a referendum on hope and what that means. And reflecting on if those challenges have made us still believe that our current course is gonna lead to something good happening in this country. For a play that was written ten years ago and set in 1962 Ohio, it really feels shockingly relevant.” That night, President Obama was, of course, reelected, adding yet another gust of wind to this “American Storm.”

“American Storm” begins at the Greenhouse Theater Center, 2257 North Lincoln, on November 16 and plays through December 16. For tickets, visit theatreseven.org.