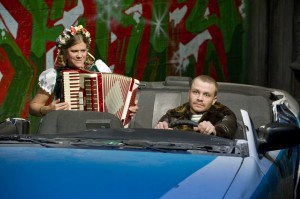 While Michigan Avenue shops exchange the jack-o-lanterns and ghoulish cutouts of their window displays for fluffy cotton balls and cinnamon yuletide ornament, a far more pessimistic and unabashedly retro vision of the holidays is revving up onstage at Profiles Theatre.

Playwright Will Kern’s “Hellcab,” a contritely episodic depiction of one cabbie’s worst Christmas Eve shift ever, is told through interconnected, sometimes humorous vignettes that envision man at his most naked, despicable and stereotyped. First presented by Famous Door Theatre in 1992, Profiles is packing an unnecessarily gargantuan ensemble of thirty-four actors onstage for the twentieth anniversary of the classic Chicago-set play, resulting in a dramedy both frantic and diffuse.

Kern’s stories, dully repetitive and predictable, are based on the playwright’s essay-worthy stint as a cab driver in the early nineties. The tales—guy gets into cab, guy is a personified exaggeration of recognizable human characteristic, guy brutishly departs cab—rely on sight gags, one-sidedness and a migraine’s worth of fortissimo performance to arrive at its destination. “Hellcab,” a truly original concept in its day, predates “Taxicab Confessions” by three years, but what the risqué cable show depended on that “Hellcab”‘s base sketch humor evades entirely is the sacramental confidentiality that these mile-long, temporary residences provide an average citizen. People rattle off some really insane mumbo jumbo while sitting in a cab.

But there is nothing casual or discreet about Darrell W. Cox’s production, multiplying the traditional six actors by seven, whose monkeying around stridently shrieks “Look at me! Here I am! I am being ridiculous in a taxi!” The actors scream their dialogue ad nauseam, as though in some exhaustive contest to topple one another.

Frenetic performance is the consequence of allowing each actor only three or four minutes of stage time rather than assembling a fluid ensemble. No actor aside from the Russian cab driver from Rockford, who is played by Konstantin Khrustov with alternating introverted stoicism and awkward toddler fits, is onstage for any substantive length. And that never-ending turnstile of individuals is reflected in the pacing. Each and every scene begins with the nervous, gotta-read-the-audience energy of the last. First scenes are always that way. The actor needs a moment to inhabit the room and hear herself speak. But the moment she finally finds her groove, another scene commences. And Mr. Groundhog fears his shadow.

On this frigid Chicago winter’s eve in Shaun Renfro’s actual, retrofitted blue taxi, women in lush furs bitchily command a ride to Water Tower Place, threatening dudes and off-the-chain crazies get dropped off on the South Side, and whatever comment Kern may or may not be making is drowned out by complacent laughter at the horrors of the status quo. Other less politicized passengers come and go—an oversexed couple, a garishly dressed girl with an accordion—but the vast majority of scenes are defined by unwritten social castes and how the audience feels toward them. A smaller ensemble might explore Chicago’s ties that bind and play against our ignorant expectations based on neighborhood or clothing style, but something about this flood of actors puts undue emphasis on our irreconcilable differences.

“Hellcab” is most assuredly a Chicago play, though a more apropos drama of diverse encounters today might be titled “Satan’s Red Line.” It’s always a riot to hear a character in a work of fiction speak nonchalantly about the streets you walk and drive on daily. But, what was, for some, a nostalgic skip down memory lane was, for me, a woeful reminder that very little has changed about Chicago’s North Side/South Side de facto segregation. That the socioeconomic and racial disparities of this play still thrive two decades later and elicit laughs of comfortable, knee-slappin’ familiarity is a depressing thought, indeed. However, the ninety minutes isn’t all for naught. A wisely directed and transcendentally performed scene portraying, with tortured serenity, a woman passenger immediately after she has been raped lends the play a beating heart and a dramatic conscience. But outside of that thought-provoking morsel, this car is safely in park. (Johnny Oleksinski)