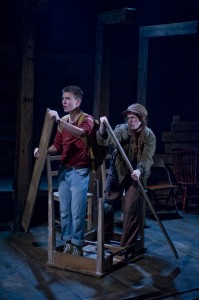 The swarm of musicals coal-mining the depths of folk Americana flies ever onward with “The Burnt Part Boys,” a blue collar comedy tour de bluegrass, receiving its Midwest premiere by Griffin Theatre Company at Theater Wit.

That suitcase of scores containing Sussman and Pluess’ “Eastland” at Lookingglass Theatre last season, Guettel’s “Floyd Collins” and lyricist Nathan Tysen and composer Chris Miller’s “Burnt Part Boys” truly owes a greater debt of gratitude to Paul Bunyan and Babe the Blue Ox than to the storybook merry-go-rounds of Rodgers and Hammerstein. In an attempt to more generously inhabit their scenic surroundings, these ambitious composers infuse their narrative with period and regionally appropriate aural accompaniment, fun and twangy but dramatically Dukes of Hazzardous.

In “The Burnt Part Boys,” a tale of three precocious youngsters who brave the mountainous West Virginia wilderness to blow up a coal mine that took their fathers’ lives a decade prior, Miller and Tysen have married traditional folk ballads with a formulaic musical storyline and slathered the outcome in repetitious upbeat pep. Each and every song is a fraternal twin with only minor variation and a carbon-copied demeanor of empty optimism. Benign lyrics such as “There’s gonna be fire/ There’s gonna be noise/ There’s gonna be hell to pay/ for the Burnt Part Boys!” tell you everything and nothing all at once.

The pattern, not altogether unenjoyable, laid out by book writer Mariana Elder, harkens back to the simplistic though ebullient animated film journeys of Don Bluth—“An American Tail,” “A Troll In Central Park,” “Rock-A-Doodle”—with a cellophane-thin layering of Faulknerian Old South corrosion to keep things dreary. But “Burnt Part Boys” is only an envious shadow of those cultural benchmarks, here lifted up by Griffin’s sincere and innocent cast.

In a performance remarkably natural and pleasantly sung for such a young actor, fourteen-year-old Charlie Fox plays Pete, a smart go-getting kid who misses his dad terribly, despite impromptu parenting by big brother Jake (Mike Tepeli). The mine, the Burnt Part, was shut down after its collapse, but is about to be reopened. Outraged and scared, Pete, accompanied by the dweebish, one-liner-loving Dusty (Max Zuppa), sets off with a few sticks of dynamite to blow it up for good.

En route, they meet Frances (a defiant Hannah Kahn), a tomboyish Laura Ingalls Wilder wannabe who, after becoming the victim of a chorus of bullying, took up new residence amid the trees. Noticing his brother’s absence, Jake and his friend Chet (Tepeli and Morgan Maher, both brotherly and paternal), chase after the crew, tiptoeing across broken-down rope bridges and passing through barbed-wire fences, the likes of which one might find on a treacherous path to an abandoned mine.

Director Jonathan Berry has a gift for staging imagery to music. Truth be told, the White Stripes transitions of his “Punk Rock” at Griffin earlier this year were, for me, the play’s highlight. He has a phalanx of aged miners, helmet lights ablaze, scorch through set designer Chelsea Warren’s expanse of woody soot, creating in the space a believable mine. But the manner in which Berry has staged the montage of musical journeying, using kicked-around chairs and long ropes as a goody bag of nature’s obstacles, is crowded and unimaginative.

The piece begs certain nagging questions that pestered me for much of the ninety minutes: Why is there no road leading to this supposedly once-functioning mine? Even without a paved road made murky by overgrowth, how can the journey be so unfathomably perilous if miners trekked there daily? In the absence of detail, one would expect a deluge of character development and memorable tunes to pass the time. Well, it would be prudent to dial down your expectations.

However, I cannot fault “The Burnt Part Boys” for lacking in dramatic coherency. If anything, the broad narrative is much too straightforward. Three friends venture off to the Burnt Part and arrive there intact with only minor, forgettable squabbles—and creative though shoved-in encounters with the ghosts of Sam Houston and Davy Crockett (Paul Fagen)—in between. The sole dramatic complication, the all-too-expected explosion of the mine, results in a short blackout and a couple of scratches, but nothing that a Band-Aid and a “spirited” full company finale can’t cure. (Johnny Oleksinski)