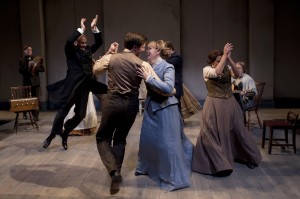 The holidays are for many the most miserable time of the year, in contrast with their expressed wonderfulness. As family gathers together, so too do our painful memories and shameful habits, and a room full of people to bring them up.

Perhaps as a distraction from the cold hard truth, holiday entertainment tends to be as sickly sweet as those too many candy canes that weasel their way into every drawer and household crevice. Even Charles Dickens, the grand interpreter of dank Victorian grime, gave his novel’s villain, Ebenezer Scrooge, a spectacular moral turnaround worthy of a family-friendly Muppets dramatization. But “James Joyce’s ‘The Dead’,” a musical set in 1904 Dublin, is anything but optimistic, expressing the burdensome realities, joys and pitfalls of life and family.

“James Joyce’s ‘The Dead’,” which opened last night at Court Theatre in an obscenely well-cast, lushly sung production, closely adheres to the popular Joyce near-novella of Irish misery basked in song and dance on which it is based. At first glance, the story of the Misses Morkans’ annual Feast of the Epiphany party may not seem the most theatrical of material, and hardly fodder for a musical. But the outward grins of the aging Morkans, Brownes, Ivors, Malins and Conroys conceal a subtextual longing and pervasive sorrow present in so much of the Irish theater cannon—as well as the Russian. Much of composer Shaun Davey’s songbook is performed in the context of a presentation—the characters are totally aware they are singing—but the casual parlor songs still unlock long-forgotten memories and latent emotions, elaborated upon by Richard Nelson’s supremely well-integrated book.

In front of friends and family, Gretta Conroy (Susie McMonagle, her smile a beacon in the darkness), wife to the play’s main character and narrator Gabriel Conroy (a too-removed Philip Earl Johnson), sings “Lean out your window, golden hair,” a musicalized lyric from the Joyce poem familiar to many because of Syd Barrett’s own version. Unpracticed, she recollects a former flame from her youth, Michael (the timid puppy dog Jim DeSelm plays another, contemporary Michael as well as the long-lost love’s possible reincarnation), a young boy who died in love with her at seventeen, and once serenaded her with the tune. Decades later, she still  reels from the pangs of heartbreak and, as her disappointed husband learns, she will till a’ the seas gang dry.

Death looms over this party even at its happiest highs. The party itself, which one imagines was formerly a riotous good time, now only sees fun in flashes. The partygoers are getting older—there’s not a kid in sight—and like so many traditions, the gathering has become obligatory. A particularly rollicking flash is “Wake the Dead,” a pounding rebellion against the annoyed downstairs neighbors, lead by actor Rob Lindley playing the drunken Freddy. But the good times are halted by the declining health of Aunt Julia (Mary Ernster), whose spinning dance with her younger self  is cathartically moving.

“The Dead” was first staged at Court ten years ago by artistic director Charles Newell, and today, in a stylistic reenvisioning, Newell puts instruments in the hands of his thirteen actors, who enliven Shaun Davey’s melodic score with personalization. The actor-musician concept became popularized after British director John Doyle’s 2005 Broadway staging of “Sweeney Todd,” and the change here is a delightful, moving addition. This is a work with an impressive connection to music, like the Irish culture it so honorably portrays. The production’s music director, Doug Peck, actually lives onstage at the piano (for the second time this year), and the chorus he’s cultivated leaves no one pining for an orchestra pit.

The only pining at “The Dead” comes from the stunning array of actors, put into visually resplendent formation by Newell. The director’s staging and Katie Spelman’s third-class-of-the-Titanic choreography feels impossibly improvised as melancholic moments in the snow (set by Scott Davis)  are discovered naturally and honestly. Though the entire ensemble is present and in-sync, the performance belongs to the ever-mesmerizing McMonagle, rising star DeSelm and the deep-feeling Ernster. These astonishing performers are anything but dead. (Johnny Oleksinski)