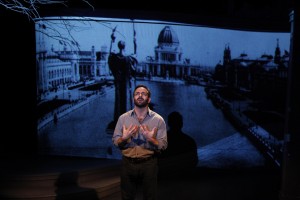 I arrived in New York City to an unexpectedly premature November blizzard, the biggest effect of an ill-timed nor’easter. But I couldn’t and wouldn’t complain. After all, this past month New York’s relationship to nature has been understatedly complicated. In the wake of Superstorm Sandy, New York was an unusual, familiar and inspiring place to be for a few days, especially given my trip’s purpose: to review three plays that ventured eastward from Chicago. For me, the shimmering snow was cold comfort.

“It’s probably snowing, right? Two in three chance it is,” jokes Noah (Stef Tovar) in Route 66 Theatre’s homegrown love letter to Chicago, “A Twist of Water.” In his first direct-address monologue, Noah, a high-school teacher and father, establishes his Windy City dwelling with brotherly sarcastic kinship. The entire audience of New Yorkers sitting in 59e59 Theater Off Broadway laughed, Chicago’s own meteorological reputation apparently preceding itself. Phew. Of all the productions I’d come to review, I was most unnerved by the potential response to Caitlin Montanye Parrish’s work, condensed but potent, that captures the spiritual essence of this city better than any Chicago-set play I’ve ever seen.

My worries were needless. Directed by Erica Weiss, Parrish’s story of Noah, whose husband recently died in a car accident, and his adopted daughter Jira (Falashay Pearson), has quite poignantly acquired newfound layers of relevance and heart since I last saw the play at the Mercury Theater nearly two years ago. Delivering a rooted lecture to the audience on the aftermath of the Great Chicago Fire, Noah speaks of the city’s (and of his family’s) triumphant resilience in the face of disaster: “We threw lever and oiled catch and stone wall before the will of Nature and said ‘We will not drown.’ Everything has changed and so must we.”

In 2011 Chicago, Parrish’s words were poetic and affecting. In 2012 New York, those same lines are prescient, visceral and daringly prophetic for the city that did not drown. Like Chicago after its fire and the East Coast after Sandy, Noah and Jira must rebuild their family’s life. Having lost a husband, Noah seeks companionship in twenty-six-year-old Liam (the wry and adorable Alex Hugh Brown), a fledgling romance that plagues the widowed father with understandable but undeserved guilt. Jira is not as close with Noah as she was with her other dad, Richard, and the trauma of his loss leads the teenager on a search for her birth mother. Jira finally meets Tia (Lili-Anne Brown) in the play’s ingeniously wrought penultimate scene, Brown and Pearson wringing out an audience’s reservoir of tears. Tovar looks on with a terrific dad’s love and disappointment. And, in the play’s end, Noah and Jira forever bound, are together picking up the pieces.

Meanwhile the monochromatically named dragons George and Martha gave up their search for the pieces decades ago. Can you blame the erudite bickerers? Steppenwolf Theatre Company’s remounting of Edward Albee’s “Who’s Afraid of Virginia Woolf?” at the Booth Theatre, Broadway’s only no-holds-barred triumph this fall, is in far finer form than its admittedly formidable Chicago production was in 2010. Much has been said about this staging’s evolving balance of power between George and Martha, the bullfighting couple who transform the romantic parries and touchés of tartly lovers Beatrice and Benedick into a curmudgeoned, post-war drunken defense mechanism. Whose reflective attributes inspire boisterous laughter and cacophonous intermission restroom clatter of “Are we like that?” In Pam MacKinnon’s uniquely naturalist production, the answer is: More than you think. 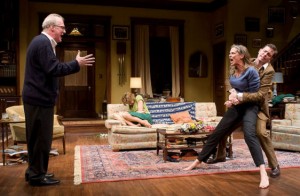 Letts, an imposing stage presence whose nerdy visage is outranked by a sizzling voice and powerful physique, refuses his George the opportunity to cower to the ever-domineering Martha: a spectacular decision that seems to either befuddle or awaken the Albee connoisseur. Amy Morton, in a turnaround from the Chicago production in which she was removedly demure, is now Letts’ equal. Sheer, sensual perfection. Her relatable repugnancy is not born of the booming screams of Uta Hagen and Elizabeth Taylor, but from the snide dismissals of a woman desperate and dissatisfied in a loveless marriage. This is a George and Martha who were mad for each other once upon a drink. In this cataclysmic revival, you can observe microscopic bits and pieces of their past in faltering-but-sincere young guests Nick (Madison Dirks) and Honey (the always spectacular Carrie Coon). And more so than ever before, the fifth character, “the little bugger,” comes to embody the couple’s gradual decline into the fire breathing monsters they’ve become.

Of course, in the event of a zombie apocalypse, the entire human race could become monsters. Lucky for the five unmarried 1950s breakfast enthusiasts in The New Colony’s “5 Lesbians Eating A Quiche,” the only apocalypse they must confront is a wimpy nuclear one. Playwrights Evan Linder and Andrew Hobgood’s campy comedy, now at the Soho Playhouse after successful runs in Chicago and in New York’s Fringe Festival, narrowly avoids the classification of “prolonged skit” by humorously exposing deeper threads of American paranoia and conformity in the decade of McCarthyism. Ginny, Lulie, Vern, Dale and Wren sure love quiche. And “quiche,” of course.

On the morning of the annual Quiche Breakfast of the tremendously named Susan B. Anthony Society for The Sisters of Gertrude Stein, oven-baked eggs are the only thing the Stepford ladies can jabber on about. That is, until the bomb goes off, and the pretty-in-pink meeting room transforms into a safety bunker. Nothing left to lose, one by one, the sisters loudly and proudly come out of the closet, or pantry, as it were. Another bomb. I wasn’t wholly enamored with The New Colony’s popular confection, whose camp could’ve been cranked up a few notches by director Sarah Gitenstein. But accompanied by a couple gin and tonics, this poor man’s Ionesco was a predominantly scrumptious treat. And the explosive climax, bombastically silly.