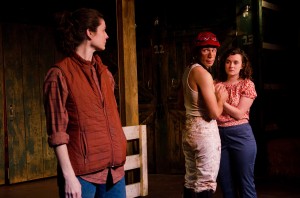 It isn’t easy to dramatize what can’t be dramatized on stage; a horseracing play can’t rely on the nags to get the point across. But Carter Lewis’ script captures the energy of The Sport of Kings, as well as the tension of the piece’s era.

During the 1962 Cuban Missile Crisis, a small-town racetrack faces a corporate expansion; meanwhile, the track’s trainer discovers her horse’s abilities. The show lifts the veil on a world most of us know nothing about.

Theatre Seven of Chicago at The Greenhouse Theater, 2257 North Lincoln, theatreseven.org. Through December 16.