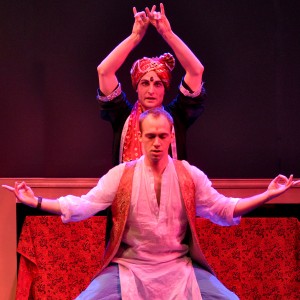 Is Bollywood just another performance style or an integral part of India’s cultural identity? If Circle Theatre’s new revival of Stephen Schwartz and Roger O. Hirson’s “Pippin,” inspired by those brightly hued films, is any indication, you can’t sever Bollywood from its Mumbai origins.

Director-Choreographer Bob Fosse’s provocative productions have seen a swell of popularity since the sixteen-year-old Broadway revival of “Chicago” and its subsequent Academy Award-winning film adaptation Hot-Honey-Rag’d their way into the elusive nexus of pop-cultural phenomena. A longtime community and high-school staple, major stage productions of “Pippin” have been popping up all over the place too. And every director wants to put his distinctive stamp on the loveable show.

So often, viewing Fosse’s legacy as an impediment, productions throw everything at the wall to see what sticks. They crowd the stage with ridiculous choreography and incongruous visual elements that, for a moment, fool the audience into believing the production has an ounce of substance. Bellie, by introducing a mountain of the new title’s expressed spectacle, drowns out “Pippin”’s quaint sensibility with humor-killing concept and stylized dance that hasn’t any concern for the lyrics’ nuance or the story’s arc.

“Pippin” is a pure and wonderful coming-of-age fable, enhanced by slippery wit and a biting contemporary persona. The musical uses a rough historical outline and a few actual figures, Pippin (Neil Stratman) and his father Charlemagne (Noah Sullivan), to tell the tale of a boy trying to figure out his purpose. Is it war? Sex? Marriage? Kids?  The gorgeous conclusion (muddled by Schwartz and Hirson in this later alteration) is that life is truly about the search, and eventually discovering the extraordinary in the otherwise mediocre.

Circle’s impressive production design (set by Bob Knuth, costumes by Jesus Perez) is recognizably Indian, with the actors adorning ornate garment and a bindi on the forehead, a mark that holds religious and cultural significance. What is more jarring is that the cast is near wholly white. Will many find this sampler platter of Bollywood and Indian culture as interpreted by a largely caucasian cast for a largely caucasian audience offensive? Almost assuredly so. It was more than a little uncomfortable to watch. But even worse, it obscures Schwartz and Hirson’s story to a fleeting afterthought.

Bellie’s liberties in the name of Bollywood go far beyond colorful aesthetic anachronism. Large sections of the score have been rewritten, or at least obscured into oblivion by the keyboard’s percussive synthesizing, to accommodate a Bollywood feel. Schwartz’s snappy melodies, butchered by the new arrangements, working alongside the director’s throbbing, unison, often vulgar choreography, turns the ensemble into hardworking upstage insects, tirelessly buzzing about only to be swatted by circumstance.

It’s a cryin’ shame too because this is a very well-cast “Pippin.” The ensemble is filled with gifted dancers replete with youthful gusto, inhabiting the litany of characters as though easily removable masks. Steve Greist notably pays eccentric tribute to Woody Allen as a wisecracking severed Visigoth head. Stratman’s sweetly sung Pippin relies on the usual naïveté of portrayals in the first act, but he imbues him with a childish back-talking sarcasm in the second that nicely represses the character’s torment and frustration.

The Leading Player, a role made famous by Ben Vereen, gets lost in Christopher Logan’s well-danced performance, slithering and conniving from the offset. The Leading Player does, in a sense, become more villainous as the play progresses, but in stripping away his fun side and charisma, the entire journey feels sinister and wrong as opposed to exploratory and exhilarating. Logan and this entire Bollywood spectacular would be wise to recall the “simple joys.” (Johnny Oleksinski)