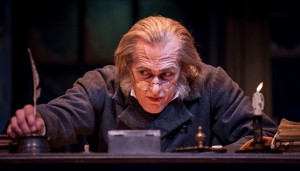 Thirty-five years ago, Goodman Theatre debuted its first production of Charles Dickens’ holiday classic at the suggestion of now-executive director Roche Schulfer, and changed the face of Chicago theater for good. Though that first production was an expensive and risky undertaking, its success became the bedrock for the audience-driven component of financing Chicago theater, as not only did Goodman put it into perpetual repeat, but so too did almost every theater company in town develop their own annual holiday production as a box-office sure thing.

Though those of us who, for personal or professional reasons, see the show many times over might be inclined to obsess over what ultimately minor shifts in staging and casting invariably take place over time, the reality is that Goodman has this one down to a science, especially under the helm of stalwart director Steve Scott. And especially with Larry Yando playing Ebenezer Scrooge, a role that recalls his even-less-redemptive turn as that other theatrical rogue, Roy Cohn, in last year’s production of “Angels in America” at Court. Yando’s mastery of vile is unparalleled, but so too is his transformation into the joyfully benevolent Scrooge here, where he gets to show some chops for physical comedy.

It’s that physical comedy that seems to be ramped-up a bit since the last time I saw the show a few years back, a knowing nod to the number of children in attendance with their parents. Not that this is really a children’s show, especially for younger children unable to sit through a two-hours-plus performance and a story packed with as much fear and despair as joy. I’ve seen the show perhaps fifteen times (mostly with my family, not as a reviewer), but I’ve never tired of it. Though its topnotch performances, dynamite Todd Rosenthal set and spirited song-and-dance numbers are a large part of that appeal, ultimately it comes down to Dickens’ text, on full display in Tom Creamer’s sturdy adaptation. There are some beautiful turns of phrase present herein, and a narrative that seems to be the basis today, nearly two-hundred years later, of many of our very adult struggles. Who doesn’t, for example, have a lifetime of scenes we replay in our dreams, of turning-point decisions that we can’t help but wonder about? And who doesn’t wish for a chance, from time to time, or perhaps all the time, to reboot our life, to shift it decisively in a more meaningful direction? And who doesn’t fear, above all, the death of a child?

Given the events of the last few years, you’ll be amazed at how much of the conservative political narrative is present in the pre-transformation character of Scrooge, who was sort of a proto-Romney. (All that’s missing today is the “Bah, Humbug.”) But especially discouraging for me this year, seeing this on “Black Friday” weekend, is how decisively our culture has chosen the old, Act One Scrooge over the new, Act Two Scrooge. Consider the narrative we’re likely to see played out relentlessly the next thirty days: twenty-nine days of hand-wringing about money (holiday retail sales), followed by a single day of celebrating the spirit of family and of selflessness. Where’s Jacob Marley’s ghost when we really need him? (Brian Hieggelke)