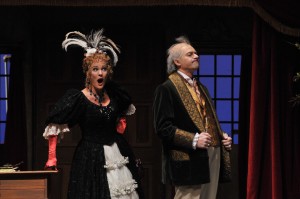 Whereas the recent Lyric production of “Werther” was constantly fighting against the music for attention, the production of Donizetti’s “Don Pasquale” that opened Sunday afternoon thankfully restores the notion that a director can significantly enhance the operatic experience by allowing the music and the drama to be the guiding force for creative vision.

Opera singers seldom make good operatic directors as they tend to see everything from the limited performing perspective of their own voice type and character, but legendary British baritone Sir Thomas Allen, making his directorial debut at Lyric Opera with “Pasquale,” is clearly a notable exception.

From the moment the curtain rises on this Jean-Pierre Ponnelle-designed production, originally from Covent Garden, it is clear that every mannerism, every detail has been carefully thought out and seems to organically emerge out of the world of the work itself rather than having been distractingly superimposed. Bravo. 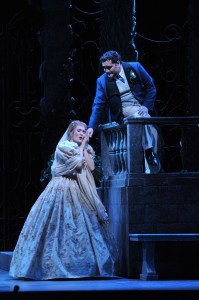 On paper, it seemed absurd to have forty-three-year-old Italian bass-baritone Ildebrando D’Arcangelo with his matinee-idol good looks play the title role of an undesirable man in his seventies who is referred to unflatteringly throughout the libretto. But with brilliant acting, hunched-over posture, a stodgy walk, a receding hairline wig with long wispy strands used for comedic effect, we really do believe that this is a man much, much older. And yet, D’Arcangelo’s vigor gives Pasquale a bit of a sparkle that suits the character well and which makes the opera’s charade more credible, to say nothing of the fact that with D’Arcangelo’s glorious voice, what is often a throwaway role vocally reserved for shopworn singers at the end of their career manages to reveal itself as having plenty of poignancy and beauty.

German soprano Marlis Petersen, who gave us such an amazing “Lulu” a few seasons back and showed us her formidable comedic chops as the maid Adele in Lyric’s last “Die Fledermaus,” makes a stunning Norina, thoroughly charming initially but a true terror once her faux marriage to Pasquale takes place without ever descending into caricature.

Local tenor favorite and Ryan Center alumnus René Barbera, whose diminutive stature is the opposite of Petersen’s, is made a more effective love interest for her by having their love duet staged balcony style with Petersen reaching up to Barbera. Barbera’s long waistcoat is used to enhance this effect and he has even shaved his trademark beard, giving him a more boyish appearance.

Bass-baritone and Ryan Center alumnus Corey Crider as Dr. Malatesta, who sets the entire plot in motion of giving his friend a comeuppance, does so with a cheerful heart rather than the scheming and mean-spirited way that this role is often played. His tongue-twisting killer duet with Pasquale in the last act is a real show highlight.

Stephen Lord keeps control throughout and has the Lyric Opera Orchestra playing with nuance, even if the Act II finale became a rushed and overplayed affair at the opening performance.

This sparkling traditional production is bel canto comedy as it was meant to be: brisk, beautifully sung and hysterical, a perfect show for the holiday season. (Dennis Polkow)