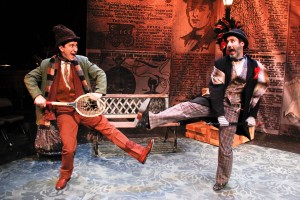 Author O. Henry’s Christmastime short story, “The Gifts of the Magi,” gets its power from an abbreviated length. The modern parable about a strapped-for-cash married couple’s attempts to buy each other presents is a read so easy that it could be spoken aloud by mom at bedtime as a more moral alternative to “The Night Before Christmas.” The plot is quiet domestic, feel-good drama that doesn’t suit the inherent immodesty of big and brassy musical theater. And Mark St. Germain and Randy Courts’ adaptation, currently at Stage 773 in a Chicago premiere by Porchlight Music Theatre, doesn’t do much to warm the heart either.

In 1984, St. Germain and Courts created a one-act Off Broadway musical from “The Gift of the Magi,” but they combined it (I assume, for length) with another piece by O. Henry, “The Cop and The Anthem,” about Soapy Smith, a homeless man who crawls out from under a pile of newspaper to serve as the vaudevillian comic relief. Soapy (his last name added by the musical) wants to be arrested so as to have a warm place to sleep for the night. While there are plenty of holiday lessons to be gained from that simple setup, the character (a charismatic Kevin McKillip doing his best with unfortunate material) is a clown removed of all humanity. His trickster ways recall Shavian tramps in politically charged plays of the same era like “Major Barbara.” However, in those dramas, Bernard Shaw had a decisive worldview and a strong agenda. O. Henry’s famed literary voice is made askew by the padded combination of the two short stories, and the agenda, which should be Christmastime uplift, is unbearably cheesy, eye-rolling schmaltz.

As one would expect of Porchlight’s production, directed by Mark Lococo, the cast sings magnificently. Nate Lewellyn, in the thankless role of newsboy narrator Willy Porter, has a delectably soaring voice that shakes the room late in the play. But the actors’ sound is too often made faint by Victoria DeIorio’s design, which doesn’t afford them enough amplification for a thrust arrangement. Chelsea Morgan and Jason Richards are genuine and honestly in-love as Della and Jim Dillingham, the desperate couple, and the only story line worth watching. Their trials and tribulations are heightened by two flatlining characters, The City-Him (Gerald Richardson) and The City-Her (Heather Townsend), who become anything and everything greedy and evil in this mean metropolis. If you’ve any doubt as to their intent, they will sing you a song simply titled “Greed” to set you straight.

Courts’ score is pleasant like a shaken-up snow globe. Drops of musical precipitate scatter around the generic newspaper-print set (William Boles) that all but erases O. Henry’s nostalgic New York locale. The music, dialogue and cast-reduction all take away from the Big Apple setting, perhaps enabling a kind of relatable Everyplace, USA. But with the antiquated treatment of a homeless character (Soapy’s ending is changed from the short story to be funnier) and a grossly disproportionate balance of warm-and-fuzzy with hard hitting reality, Everyplace is not the town for me. (Johnny Oleksinski)