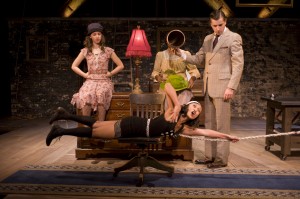 So many people die in “Failure: A Love Story,” a new play by Philip Dawkins that opened on Monday night at Victory Gardens Theater. In 1928, the three Fail sisters, Nelly (Baize Buzan), Jenny June (Emjoy Gavino) and Gertrude (Mildred Marie Langford), respectively die of a statue fall to the head, drowning while swimming across Lake Michigan and losing to the then-terminal consumption.

The girls’ immigrant parents, Marishka and Heiner Failbottom—renamed Marietta (Janet Ulrich Brooks) and Henry Fail (Guy Massey) at Ellis Island—were killed by a car accident, plunging into the Chicago River coincidentally on the same day of the S.S. Eastland sinking. Yes, so many people die in “Failure: A Love Story.” But the only death that truly moved me was not that of some person I was forced to care about, but a dumb dog’s.

Adopted Brother John N. (Michael Salinas), who arrived at the Fail home and Clockworks on Lumber and Love along the Chicago River as an infant, python in tow, is an anti-social amateur veterinarian. He also believes in the humane practice of euthanasia when life has become too arduous to bear. As this dog, played by Massey with a 1930s wagging tongue, is about to be put down, he bittersweetly recalls a time when his best intentions went awry. Years earlier, the pup brought inside the house a dead rodent, which he figured was “really something swell.” The family, disgusted, thought differently. That moment, the most recognizably human moment in Dawkins’ play, summoned memories of all the metaphorical dead rodents I’d dragged into my house, only to encounter looks of shock or dismay. In a word, failures.

That twisted, honest scene is only a speck of this two-hour-long intermissionless sprint, which otherwise gives way to reassuring storybook smiles and forced eccentricities. Whose dark side is explicit, but fearfully shy and timid. Whose rhythmic expository text, all delivered in a sit-down-round-the-campfire cadence, never lets the play grow up from an elongated prologue. Whose cleverness is so apparent that the rest of the students in the lecture hall bitterly resent its perpetually raised hand. Whose ambitions are so immense, sweeping and unquestionably well intended, that you can’t help but admire it from afar. Really, the title of “Failure: A Love Story” describes itself just as well as the life and times of Mr. Mortimer Mortimer (Matt Fletcher), the golden-hearted swift talker who falls in love with all three sisters right before they die, beginning with the gorgeous Nelly and ending on Gertrude’s deathbed.

Each actor has a genuine saucy pluck and the creative team palpably enjoys putting this production together in the tiny Richard Christiansen Theater, but regardless I felt at a wide remove from the characters and this story. These always-smiling women and ever-adoring parents’ only real flaws—quirks and eclecticisms are not flaws—is that they all died too early, something that they had no control over. Their only hardship, their parents’ death, something else they had no control over, comes up in thematic bits and spurts (all the actors play watchful wall clocks or exotic household pets at one time or another), but the trauma doesn’t appear to hinder their quality of living very much, if at all. Personality wise, they are perfect. Kind, talented, unique, an ideal pageant family. Not for a second do you dislike any character in this play, which is precisely why you do not care about them. 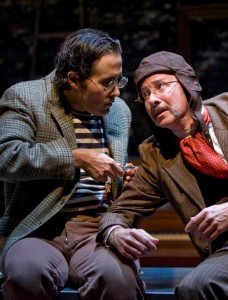 Dawkins has written a nostalgic work made up largely of exposition. There are scattered scenes of person-to-person dialogue, but the mouth of the river is shared narration. The playwright’s narration is verbose, simile-laden and bordering on twee. Though cuteness abounds—even the Tarzanical Johnny Weissmuller is a brief offstage antagonist—”Failure” inspires the occasional laugh. Salinas, the most endearing actor onstage, in particular has a way of calmly and collectedly delivering a zinger. But most of the jokes are tongue-in-cheek commentary on the absurdity of the plot itself, which piles weirdness upon weirdness until the accumulated weirdness, fastened with whimsy, finally becomes overwrought and decadent. Some of that decadence, however, is owed to Seth Bockley’s excessive direction.

Back-to-basics storytelling plays like “Failure: A Love Story” that rely on an “and then this happened” format for their evening require innovation in staging. Actor-centric, found-object direction is in-vogue, and the trend is thrilling and joyous, but it works best at its most economical. Too many props, too many character voices and too many movements threaten to unravel the ensemble and, here, come close to resembling a touring children’s trunk show. Bockley throws in performed indication for nearly every minor detail, dragging along the story’s pace and running the actors in circles. With all the physical hoopla, the action becomes unstoppably frenetic, all events performed at breakneck pace with little opportunity for reflection. And, in a play delivered in the past tense and crammed full of aphorisms a la Dr. Seuss, everything is about reflection.

When Mortimer first steps into Fail Clockworks (Scott Davis’ blackened brick wall set with a barely visible map of Chicago is a triumph), Gertrude, the meekest sister, tells him that he is a “right now” kind of guy. She says this in a disparaging tone, her own brain being a little in the past and a lot in the future. Though these sisters are artisan masters of time having grown up in the family clock shop, the play’s stubborn refusal to embrace the present is its grandest failure. (Johnny Oleksinski)