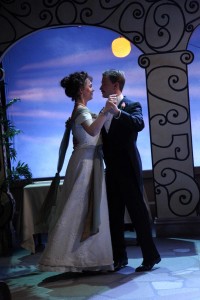 For a lively reprieve from the abundance of seasonal plays and pageants, Remy Bumppo offers up one of George Bernard Shaw’s few comedies, “You Never Can Tell.” In general, classic British plays can be a frightening notion; even more frightening is sitting through lengthy dialogue done poorly. Thankfully, this is not the case in director Shawn Douglass’ surprisingly modern production. The contemporary look and feel is perhaps more a credit to Shaw’s gift for timeless playwriting and keen social insight.

Initially written as a send-up to Oscar Wilde’s successful “Importance of Being Earnest,” Shaw employs a similar sense of romantic pluck, but pairs it with meatier themes and thicker lines. “You Never Can Tell” can almost be summed up in its own words, “it has been short, but it has been voluble.” The play, while brief by Shavian standards, is still every bit as juicy with social commentary as any of his more serious works. It’s especially new age in its forward ideas about divorce and gender equality in the late nineteenth century, a somewhat ironic theme in the current binders-full-of-women era.

Often overlooked in favor of Shaw’s more powerful pieces, this play is seldomly produced, even less so in Chicago. Remy Bumppo’s production marks an area first in more than thirty years, certainly a definitive version that will hopefully stir up some renewed regional interest in Shaw. As with most Remy Bumppo productions at The Greenhouse Theater, the scenic and costume team does an impeccable job of bringing this bygone period back to life in artful authenticity.

Sumptuously cast, “You Never Can Tell” is charming and sincere from the top. Introduced in the opening scene is a hopelessly endearing dentist named Valentine (Greg Matthew Anderson) and his first patient, Miss Dolly Clandon, played by C. Jaye Miller, who is amusingly natural in her naïveté. Alex Weisman shines in the role of Dolly’s cheeky twin brother, Philip, and together Miller and Weisman have great comedic chemistry. Soon Valentine meets and instantly falls in love with the older Clandon sister, Gloria, played with a carefully restrained vigor by Eliza Stoughton. After a chance lunch invitation at a seaside resort, Valentine inadvertently brings the long-lost Clandon patriarch, Mr. Crampton. Soon the battle of the sexes presents itself between staunch feminist Mrs. Clandon (Elaine Rivkin) and her estranged husband Crampton (Doug Hendel). Hijinks ensue when philandering Valentine begins courting similarly staunch Gloria.

Amidst the volley of witty banter, a vast depth of wisdom pertains to the topics of love and family. Shaw’s genius lies in sheer scene structure and the reflective properties each character displays. The cast seems to achieve a nearly perfect balance between the subtlety of the script and the boldness of gesture. Never a pandering moment in this lighthearted family farce, all of the humor lands with a satisfying crisp. If there’s anything to take from “You Never Can Tell,” besides how far dentistry has come, it’s how much Shaw’s work has influenced modern playwriting. (John J. Accrocco)