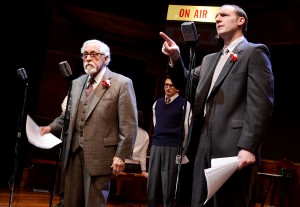 It’s probably blasphemy to suggest that American Theater Company’s radio rendition of this holiday tale is better than the iconic Frank Capra film, but it’s certainly close under the superb direction of Jason Gerace and artistic director PJ Paparelli.

With a swanky look and a fast-moving pace, ATC’s version starts off with a feel-good vamp from the narrator (Chris Amos) that includes quirky messages from audience members, local businesses and game-show contestants. Joining the cast this year is Cliff Chamberlain as George Bailey and Mike Nussbaum as Mr. Potter. Chamberlain does a remarkable job being convincingly boyish and deeply intense without slipping into a stale Jimmy Stewart impression. Nussbaum is both chilly as Potter and honest as Clarence, gracefully pushing past any “Touched by an Angel”-ish associations. Sadieh Rifai and Jessie Fisher bring the female characters to life in full color.

This production is less about the gimmick of a staged radio play and more concerned with performances. The radio script allows the dialogue to get to the true depths of the story quicker and, in turn, ups the intensity of each scene. A short, choreographed musical number is carefully tucked in, but it’s exactly what this production needs to give itself just the right amount of Christmas cheer.

What makes “It’s a Wonderful Life” a great story is its attention to timeless, national themes. It’s impossible not to draw comparisons between George Bailey’s humbling commitment to a failing lending institution and the sweeping results of this year’s election. Its popularity tells us that people want to live in a world where neighbors take care of each other, especially when the economic or social restrictions tighten. In the opening, Gerace’s malleable script makes wise reference to “Death of a Salesman” and it’s quite interesting what these two stories have in common. Drawing upon the silent fear of the late 1940s, additional references are made to the nuclear age and the beginnings of the Cold War, a fear that, in a way, still promotes peace.

Perhaps the most generally universal conflict is the dichotomy of life as George hoped it would be versus the ordinary, suburban existence he passes into. The tragedy is George’s descent into bitterness, forgetting the value of life and all the good he’s done for the community. While not especially glitzy or glamorous, “It’s a Wonderful Life: the Radio Play” does point out reason for the season without beating us over the head with religion. (John J. Accrocco)