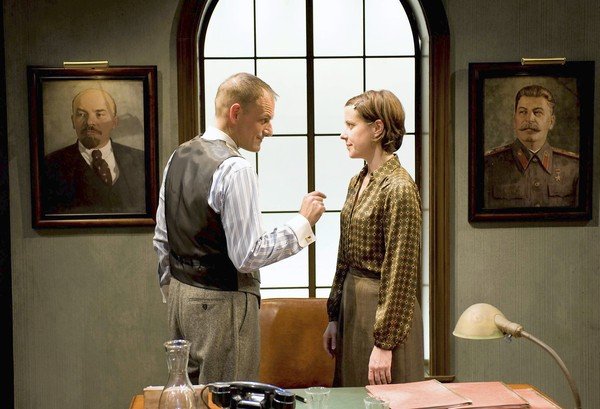 Borrowed from its own script, “it’s a blessing to be satisfied with so little” is an excellent way of describing “The Letters” at Writers’ Theatre in Glencoe. Short and sweet at just seventy-five minutes, John Lowell’s 2008 potboiler transforms the bookshop theater space into a 1930s Russian government office in its regional debut with direction by critically acclaimed Kimberly Senior. Set under the relentless rule of Stalin prior to WWII, the Orwellian fear of government institutions smothering its citizens was all too real.

“The Letters” is not necessarily a period piece, rather a study in dramatic structure. Relying on the interview device, Lowell delicately coaxes guilt out of his two characters. Immediately at unease, government transcriber Anna (Kate Fry) nervously fidgets while waiting in her boss’ office. Once the brazen and smug Director (Mark L. Montgomery) enters, tension starts to build. It is implied that Anna is guilty of something, but what she’s guilty of and how much the Director knows is revealed in swift, yet highly literary dialogue. The intensity of “The Letters” is based on the age-old fear of being in trouble at work and how far we’re willing to sabotage each other in hopes of promotions. Another theme mined is how closely personal life and work should mingle.

Incredible performances from Fry and Montgomery command full attention as each line potentially condemns the other. Anna begins as frightened and bullied, unaware of what consequences her answers will bring. The Director wagers that everyone has something to lose and will stop at nothing to prove that Anna’s co-worker and friend was indeed guilty of copying inconsequential letters. In the end, the irony is that the Director’s cruel bravado is beaten into cowardice by Anna’s steely integrity. Between Fry, Montgomery and Senior, not a moment of this lofty script is overlooked or underacted, concluding just in time to catch your breath. (John J. Accrocco)